Here’s the last of this week’s reviews from Neil, my globe-trotting expat friend. ~Rosa

No joke about the title; that’s what the first bit of the English translation of this bar says. SladCo, or Slad & Co., is the Russian brand that produced this, I later learned. I would have gladly paid a few tetri more for this bar from the Tbilisi supermarket I found it in if the manufacturer would have put that money to buying more punctuation! 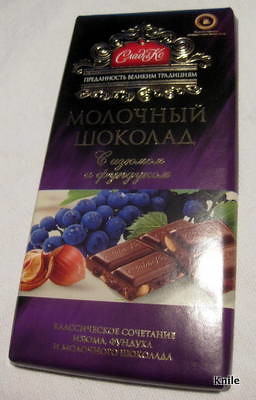 Once again, I was confused by the pictures on the label. Currants? Some kinds of berries? Oh, those are grapes? Thanks, English text sandwiched  in between seven other languages spoken around the Caucasus! 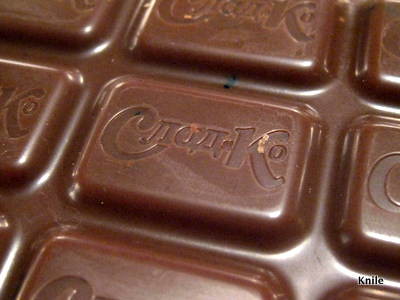 The bar was sectioned into 24 pieces, each imprinted with the Russian for “Slad & Co”. Mostly, it looked to be uniform chocolate, but a half dozen black specks were on the surface, hinting at the fruit inside. Pieces broke reasonably well along the scoring, with minimal shattering. 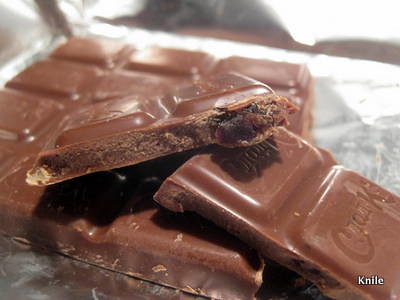 The chocolate was mild but not quite milky, and the nut pieces were small but noticeable “inclusions”. The raisins, on the other hand, were whole and therefore prominent and quite pleasing.

Every component of this candy worked well with every other component. There was a bit of a dry finish after multiple pieces, but that could just be my dehydration talking. 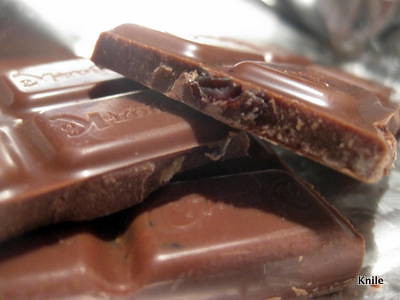 I wish I’d picked up a good bit more of this. I found it far too easy to munch through much of the bar on first tasting it, and I feel like it’d be a nice after-dinner treat, perhaps with some cheese or in the winter.  I’m happy to give this an OM.

One thought on “Guest Post: SladCo Traditional Milk Chocolate With Large Inclusions With Raisins And Hazelnuts”