I’ve turned reviews this week over to Neil, my globe-trotting expat friend. ~Rosa

Easily the most exotic trip I’ve taken in a while was to the Republic of Georgia, where I visited a childhood friend of mine for a long weekend and saw some absolutely breathtaking scenery. I, of course, was incredibly curious about the local food and demanded several trips to grocery stores in Tbilisi. Today I’ll share with you one of my finds.

All I knew of this chocolate bar when I selected it was that it had lemon in it. Fortunately, once I got it home and flipped it over, I was able to read that it not only had Georgian text, but also Russian and English descriptions of what it was. The Barambo corporation apparently markets to various linguistic groups. 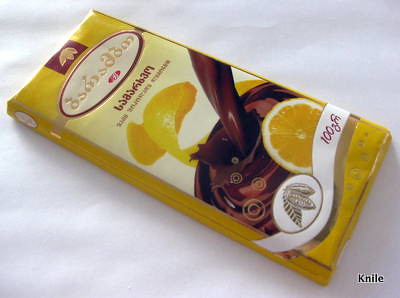 The phrase “Do[sic] not contain product of animal fat” made me think that the “Lenten” in its name means Lent-as-in-the-period-before-Easter, rather than some other mysterious mistranslation. Any readers with experience in this?

The bar came divided into 12 chunks, and I broke half of them off without much difficulty, but some messy breaking patterns resulted. This revealed tiny chunks of what presumably was lemon peel. To call them cubes would require some magnification. 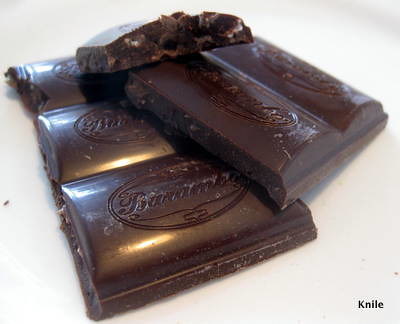 While the chocolate was passable and unfortunately definitely tasted like it contained no animal fat, the lemon was an even more puzzling addition. Some chunks were harder to chew than others, leaving one to wonder if they were even edible.

On the whole, it felt like a bit of a novelty. I could see having one chunk alongside a cup of coffee or tea. More than that seems just not that fun. I had a second chunk after the first, and it grew on me a bit, so I’ll give this an O.