Here’s another great guest post from my ex-pat friend, Neil. Jealous that Zotter is so easy for him to get! ~Rosa

I didn’t even have to travel out of the country for this one! I found the Zotter Mitzi Blue Nussmix (“Nut mix”) in a new organic gourmet shop in town. I was looking for a cookware store, then discovered that the cookware had disappeared and food had gone in its place. Quite a surprise, but a welcome one. 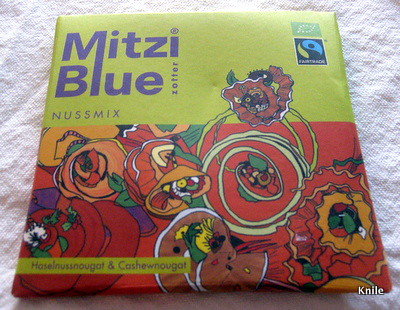 The packaging made me think it was one of those world music CDs. Perhaps this was intentional. While the bar itself was a disc (is that geometrically possible?), the similarities ended there. 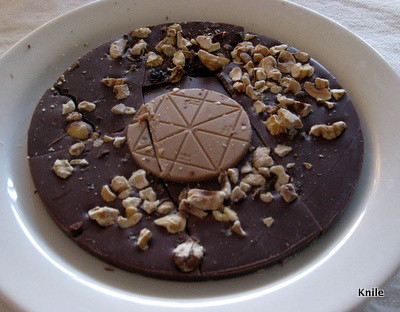 This fair trade, organic combination of hazelnuts, hazelnut nougat, cashew nougat, walnuts, and milk chocolate was a bit broken when I took it out of the packaging. This made the task of figuring out where to start that much easier. I was most intrigued by the center circle.

The milk chocolate of the main disc was very plain and light. While the surprisingly large nut chunks were distributed somewhat unevenly, they were tasty and added an appreciated varied texture. 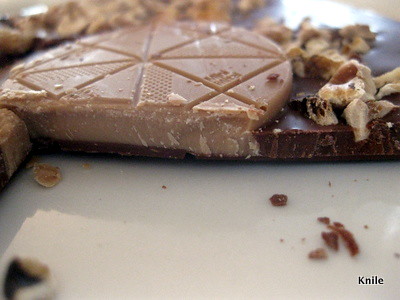 It turned out that the center disc was cashew nougat! It broke off as though it would be crispy but was very pleasantly creamy. I wished the whole thing had been cashew nougat.

The predominantly boring milk chocolate really underwhelmed though, so I’ll give this whole piece an O. The company has a whole line of Mitzi Blues, so maybe I’ll track down some more. It’d give me an excuse to visit that delicious shop again…