My cups got a little squashed and cracked by the time I got to unwrapping them. Each package contained two cups.

The peanut butter center was quite dry and crumbly and turned into a thick, dry paste on my tongue. It had a strong nuttiness to it, which was great, but I also found it overwhelmingly salty – less great. 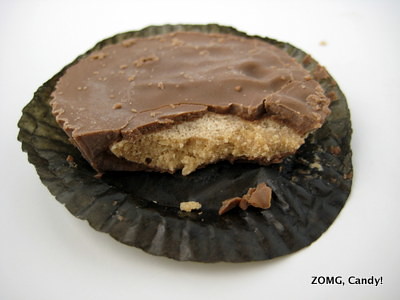 The sweet chocolate helped some to temper that saltiness, but I still found it to be too salty. The nutrition facts reports 115mg in 2 cups, which doesn’t sound like much, but it certainly tastes like much.

Smoothie Butterscotch was a lighter golden caramel fudge color. Its coating was sweet and creamy and sort of fake-buttery tasting, with little bits of peanuts in the top layer that added a great fresh roasted nuttiness. 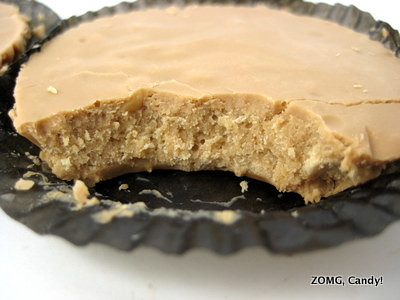 The center, however, had the same dry saltiness. Because the butterscotch coating was sweeter than the chocolate, it stood up to the salty center a little better.

I like the general flavor of these treats, and I like sweet and salty flavor combos, but these were a bit too much on the salty. I can’t handle more than half a cup at a time, though I did enjoy the halves enough to give these an O.

Thanks to those who entered my Sour Patch giveaway contest! My winners are Sarah for her should've-been-sweet story, Taylor for...