/* Error on https://www.google.com/cse/style/look/minimalist.css : Something went wrong: cURL error 28: Failed to connect to www.google.com port 443 after 3702 ms: Connection timed out */
Skip to content

As I try to recover from a week in New Orleans, ex-pat friend Knile has a couple of guest posts on deck. ~Rosa 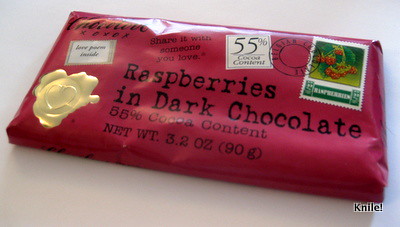 I don’t remember where I picked up this Chocolove bar. It could have been downtown here or on my Swiss trip. Either way, I clearly didn’t read the label closely to find out that it’s made in one of the Fifty Nifty United States. Rosa’s reviewed other Chocolove products before, but not this one, so at least it’s somewhat novel that way. 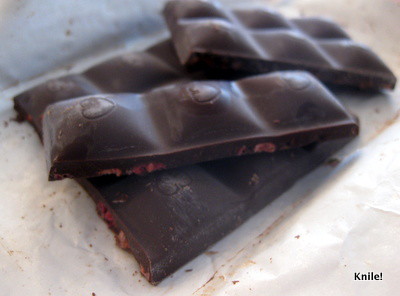 The bar looked a bit dusty and dried up when I opened it, which detracted from its otherwise curvaceous and heart-icon-covered appearance. Each piece broke off cleanly; only a few flakes fell on my coffee table. 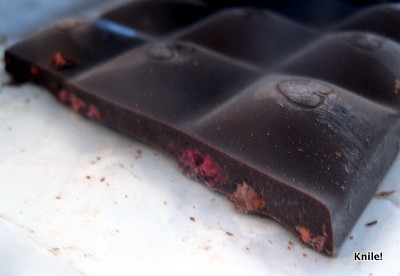 The chocolate itself was fairly unremarkable, with a thin flavor. I wanted it to be creamier. The bits of raspberry provided a very welcome crunchiness, though their fruitiness took a while to build up, not at all the “tart… burst of flavor” the package promised.

Not a huge winner for me in the end, but maybe my expectations were set too high. This gets an O.