As I try to recover from a week in New Orleans, ex-pat friend Knile has a couple of guest posts on deck. ~Rosa

I can’t believe I’m still eating what I bought in Switzerland nearly six months ago! I’ve been dying to tuck into this one in particular, but have held off for a rainy day. Here we are: it’s raining.

The Ovomaltine bar is produced by Wander, a subsidiary of the Associated British Foods company, which also does, yes, make the classic chocolate malt powder Ovaltine. I loved Ovaltine as a kid, and that’s meant that ever since then, I’m pleased to try new forms of malt. 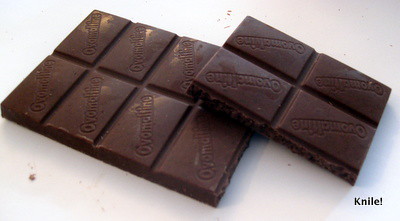 The bar broke on its own when I was unwrapping it, showing that the twelve brick-like pieces were positively riddled with malt powder.

Eating it was pure joy. The milk chocolate worked very well as a vehicle for the malt, as any fan of Whoppers or Maltesers could tell you. The powder was evenly distributed and so every bite effervesced. 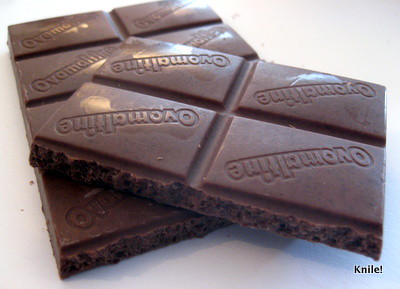 If you told me I had to eat six of these bars a day, I’d be a happy camper. OMG, this bar was wonderful.