Hey candy lovers! Today we’ve got another post on candy from the Netherlands, courtesy of Neil. ~Rosa

Hoi hoi! I’ve been “hamstering” candy over the past few months, so I have a whole lot of posts in the queue. The first is grocery store brand Albert Heijn‘s Zachte Frisse Vruchten, or Soft Fresh/Bright Fruits. 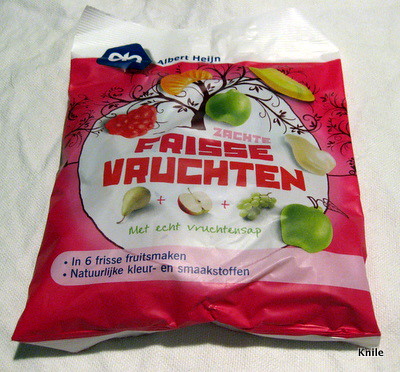 The bag advertises “six.. flavors” but only shows five varieties. There are, indeed, six different types of candy inside: banana, orange, pear, green apple, strawberry, and elderberry. My friend Jana helped me review and provide some global perspective.

Banana’s flavor came through very slowly and when it did, it was much like a circus peanut. That time waiting for flavor was spent chewing, as the body of it was more like plastic than elastic. I also took this time to explain circus peanuts to Jana, because they’re not available in Germany. One must wonder sometimes about globalization. O

The orange slice was the one most visually similar to its real life counterpart. It had a sweetness like an orange soda rather than a real orange, however. Based on its appearance, Jana expected it to specifically taste like a clementine. An unexciting O. 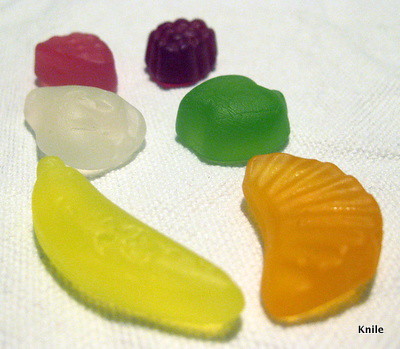 One piece looked look a bicycle seat. For Jana, it looked exactly like a pear, and “if it hadn’t, [she] wouldn’t have been able to tell what it was.” I must confess that I don’t really know what pears taste like. I mostly tasted lemon, neither overly sweet nor sour, just pleasantly inoffensive. The pear pieces had the hardest bite at first, but rapidly became chewy. An O.

The green apple’s classic flavor made me very happy after the pear disappointment. Jana thought it was too sweet to be “sour” apple, but that’s exactly what made it so perfect for me. This one really stuck to my teeth. OM

Strawberry, the pink piece, had the most intense flavor of any and it was like a Starburst, which also haven’t made their way into Germany yet. They’re really missing out! Jana compared the flavor to German Schnüre, which are something like Red Vines. I would happily eat a whole bag of these. Definitely an OM from me. 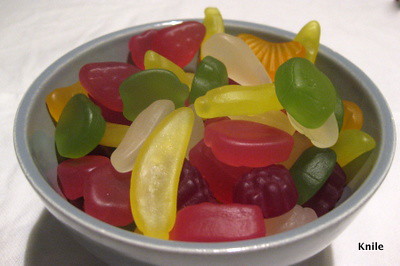 The final was the most mysterious. A translation of “vlierbessen” led to the conclusion that these grape-bunch-lookalikes were elderberry flavored! So unexpected! The flavor struck me as herbal and liqueur-like, perhaps because I’ve had the elderberry liqueur St. Germain before. Being so confused by what it was supposed to be, I have to give it an O.

Overall, the bag was not a bad thing to nibble through for the evening, but I’m not rushing out to pick up more. Oh, let’s be honest: I only bought it because it was on sale.