Here’s another Euro-chocolate review from Neil! Any readers know if these Cadbury Blisses are related to Hershey’s Bliss in the U.S.? ~Rosa

Hallo! Neil here with another European treat. This one is possibly found in the States, but I can’t recall having seen it there, perhaps because it launched after I moved over here.

It’s the Cadbury Dairy Milk Bliss Dreamy Chocolate Truffle, or CDMBDCT. Cadbury ran into some trouble with its original ads for the Bliss line, which makes you question the judgment of some advertising firms. 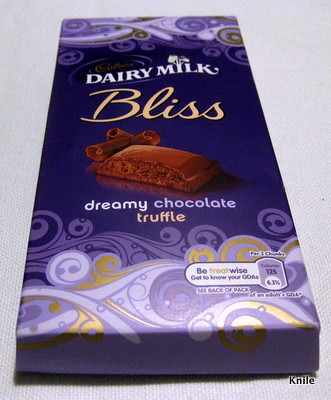 So there’s a short story behind this particular candy bar that has been in my cupboard for the past few weeks. The short version of that story: I didn’t even mean to buy it. I meant to buy another that I was forced out of purchasing. The long version can be found after the break.

The CDMBDCT came in very elegant purple packaging with some gold highlights, making it seem like a real treat that shouldn’t have been pushed at me as a last-minute add-on at a clearance price, LADY [Rosa’s note: Neil’s indignancy will make sense if you read his explanation after the break]. The  elegance continued with the gold fabric-paper wrapper. 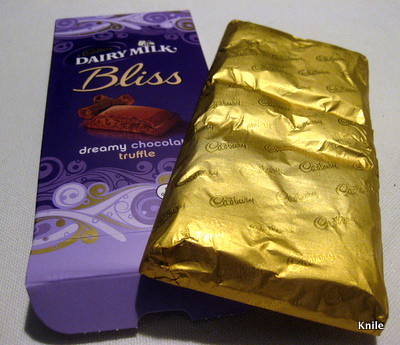 Individual blocks broke smoothly and were quite hefty. Half a block was gone in one bite. An al dente feeling to the outer body and the expected softness of the truffle filling worked well together. The milk chocolate was nothing special, while the truffle’s fluffiness belied its sweetness. 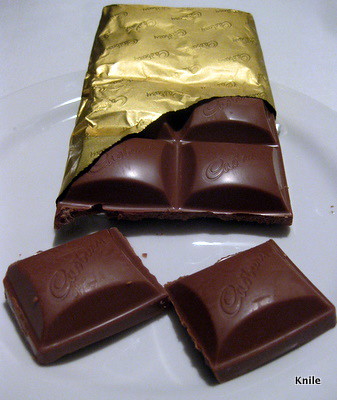 That was all it had though: fluffiness and sweetness. Not much flavor to speak of. “These would make good s’mores,” I thought (Somebody please try this and leave a comment about your results!), but overall, it was not an amazing chocolate bar. 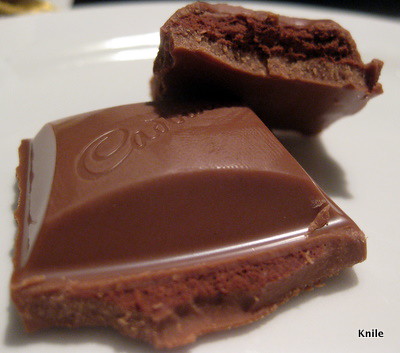 Each block went by quickly. Sadly, this was more out of a hope for it to improve or for my dessert stomach to be satisfied than out of sheer ecstasy. Overall, I really wish I could remember what that other candy bar was that I wanted, so I could pine for its loss properly. I’m going to have to give the CDMBDCT an O.

The longer version, presented as a cautionary tale: I was about to hop on the Eurostar train out of London, and I picked up some trashy reading material from the newsstand. As I always do now, I scanned the candy racks for exciting products. I grabbed a candy bar I didn’t recognize, with the purpose of eating & reviewing it. At the counter, the cashier started yammering at me about the stack of Cadbury bars, which were a Pound, and the one I’d picked up, which was 80 cents, and would I like a Cadbury.

It was all very fast and confusing in a dialect of English I’m not used to, and I said “Oh! Em, er, uh, okay, I, uh, I’ll take a Bliss.”  She rung it all up then handed me… the Cadbury & my magazine. I hadn’t gotten whatever the original bar was that I’d wanted.

UPSOLD! Curse you, cashier lady! I had, in my mind, expected to purchase TWO candy bars. I was okay with that. Yet there I was, with only the one I didn’t want, and a train to catch!

Amused at my “problem” of having purchased a Cadbury bar, I set off for my train home and told my story to my travel companion, who was also pretty mystified at the experience. When I arrived home, I chucked it into my cupboard along with a shockingly high number of other English chocolate products. (Especially shocking considering I changed trains in Brussels and bought no chocolate there! Sorry, Rosa!)