Clark bar, where have you been all my life? I’d read about them but had never seen one until Economy Candy. I thought they were no longer being made, but fortunately, they’re still in existence. Nostalgia candy usually disappoints, but the Clark is surprisingly tasty.

What is a Clark Bar?

As the wrapper says, a Clark bar is chocolatey coated peanut butter crunch. Yes, that means that it’s covered in fake chocolate. Surprisingly enough, the Clark’s fake chocolate coating is pretty good, but I still wish it were real. 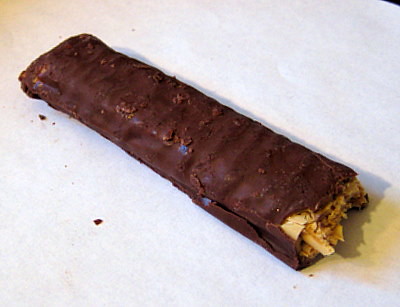 The Clark reminds me of a Butterfinger with it’s flakey, toffee-like innards, only the Clark is much more crumbly and less apt to get stuck in your molars. That’s a good thing, as I avoid Butterfingers solely because I hate picking it out of my teeth later. There’s a little peanut butter taste in the flakes, but it’s fairly subtle. 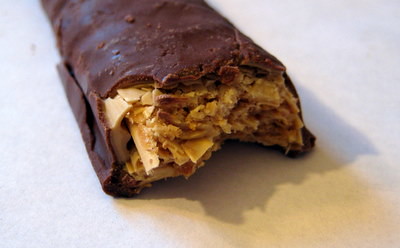 Overall, I thought the bar was too sweet, and I could have used a glass of milk to wash it down with. I think covering it in real dark chocolate could fix that. Despite the sweetness, I actually ate the whole thing in one sitting for breakfast (healthy, I know!) when I hadn’t intended to. Healthwise, the Clark is actually not too bad for a candy bar. 220 calories, 8g of fat, 4 of them saturated.