I’m currently at the Society for Neuroscience conference in New Orleans, so I’m turning things over to some globe-trotting friends this week. Cameron and Meredith are former roommates of mine (we did lots of chocolate truffle tastings together), and they’re writing about some treats they bought on a recent trip through Japan. ~Rosa

Hello folks! It’s a pleasure to be here.

I recently schlepped a 40-something pound duffel bag of candy and snacks back from Japan, at the instigation of my travel companion and co-taster Meredith. Customs gave me some pretty weird looks! We’ll be picking a few of the gems from the pile to share with you over the next couple of posts.

Today’s selection is Tiramisu Chocolate and Maccha Tiramisu Chocolate. The packaging lacks an English translation of the brand name, and searching by radical helpfully provides “former time pioneer”. If anyone knows the answer, I’m all ears! 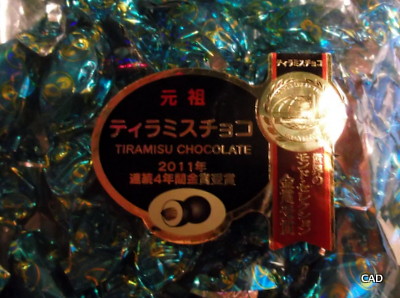 The gold symbol on the right proclaims that they were a 2011 selection by Monde Selection; I’m unaware of how reputable that organization is.

On to the candy! Tiramisu Chocolate’s up first. 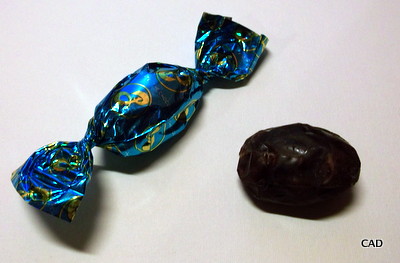 Cameron’s Notes:
It smells like cocoa, dark and powdery, but it doesn’t come through in the flavor – the cocoa layer on the outside is very thin. The almond in the middle is quite nice – the crunch is right on. I’d guess they probably dry-roasted the nut from the flavor and crunchiness.

The middle tiramisu layer dominates the flavor and lingers nicely, but it is not as almondy as I would hope and is instead very buttery. I’d prefer this treat to be a hair sweeter and have stronger nut flavor, but overall it’s pretty tasty. An OM – I’d eat these happily, but there are a lot of things I would buy instead if I saw them on the shelf. 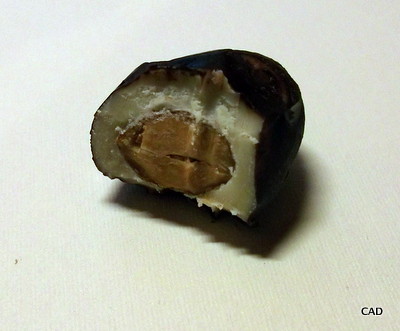 Meredith’s Notes:
I am a huge sucker for any sort of coated almond confection, so I had high expectations for the tiramisu almonds, and they mostly delivered. I thought the middle “custard” layer might be yogurty based on its appearance, but it had the more neutral flavor and slippery mouthfeel of a vanilla buttercream, providing a satisfying contrast with the almond crunch.

Based on its name, I also expected some sort of coffee flavor to come through at some point, but I guess that referred more to the layered construction than the flavor, which was 99% butter-almond, 1% cocoa, 0% coffee. Though not complex or wildly innovative, these almonds are a solid contribution to the coated nut domain. OM.

On to the Maccha flavor! 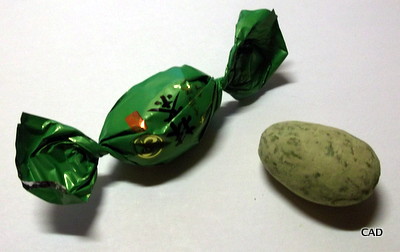 Cameron’s Notes:
The maccha is undetectable to my nose. Notably softer than the cocoa flavor, to its detriment I feel – doesn’t nail the crunch nearly as well. The maccha powder is quite bitter – comparable to a dark chocolate, but lacking the complexity to back it up. It eventually ends up at the same butter flavor as before.

There’s a nice moment where the two flavors balance, but it’s fleeting, caught between the overly aggressive initial maccha flavor and the rather bland butter aftertaste. I like maccha in other contexts, but these are clearly inferior to the cocoa flavor. — 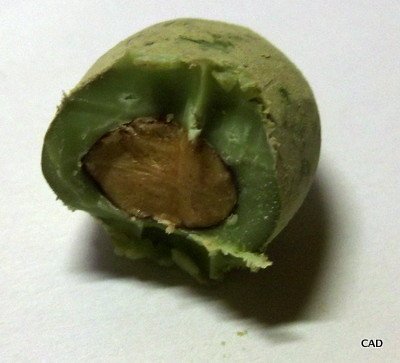 Meredith’s Notes:
As an even bigger sucker for matcha-flavored anything, I found the matcha tiramisu nuts disappointingly weird. The unsweetened matcha powder coating the nuts completely dominated the experience and left an astringent, musty aftertaste in my mouth and nose.

I bravely sucked all the bitter powder off a second nut so that I could evaluate the inner regions of the confection without the confounding surface mustiness. Indeed, the matcha flavor was much more balanced and subtle in the buttercream layer. This would have been a much better treat if the matcha-infused buttery layer had been rolled in cocoa instead of matcha. A — from me too.