I’m currently at the Society for Neuroscience conference in New Orleans, so I’m turning things over to some globe-trotting friends this week. Cameron and Meredith are former roommates of mine (we did lots of chocolate truffle tastings together), and they’re writing about some treats they bought on a recent trip through Japan. ~Rosa

For our second and third post (to run on Friday), we have a selection of fruit gummies from Meiji! Rosa’s reviewed a red grape variety of these before, which as we discovered is actually a slightly different product from what we’ve got here.

As you can see, there are two package sizes: Both contain ~50g of candy, but the larger packages (labelled as 2700mg – this number appears to refer to the amount of collagen in the candy) are fairly traditional fruit gummies while the smaller green package (1200mg collagen) is the dome-shaped, gooey-center gummy that matches what you’ve seen before. 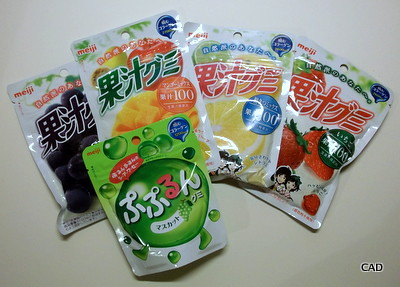 We picked these up in the Ameyoko shopping area, along with about 80% of the candy we brought back. Ameyoko is a several-block area nestled along the rail line to Ueno Station in Tokyo. The area was famous for its candy shops a long time ago, although it’s probably more famous as the site of a major black market in the postwar era.

Nowadays it’s mostly a mishmash of all sorts of stores, with lots of clothing and fashion accessories. But there are still several candy vendors, and the grocery store we went to is almost hilariously candy-centric – something like 75% of the floor area is aisle after aisle of candy, both local stuff and the major national brands like Meiji.

On to the taste. Meredith and I had substantially divergent opinions on some of these, so I’ve listed our notes separately. She’s obviously the more experienced gummy consumer! 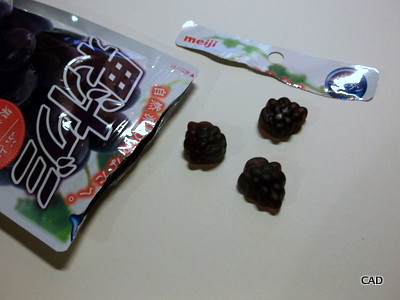 Cameron: These are pretty basic mass-produced gummies: chew is firm, not at all sticky, with a robust and not overly sweet grape flavor. I kind of think red grape is the easiest gummy to get right, since it has a strong, fairly standard flavor that you can get from basically any manufacturer. O

Meredith: I disagree! In my gummy experience there are two general categories of grape candy: the basic mass-produced type that Cam describes, which has the generic grapeish flavor of Dimetapp and the sugar content of grape soda, but basically nothing else to recommend it; and a second type that does some degree of justice to the complex seedy flavor of real grapes (the gold standard here in my comparatively limited experience being grape Hi-Chew, which I love).

I’d put these gummies more in the second category: They have an aroma and flavor that is seedy and a little wine-y, and a chewiness that is pretty gummy-typical but nonetheless satisfying. OM. I probably would have eaten the whole package if Cam didn’t have me on a tight candy-sampling schedule. 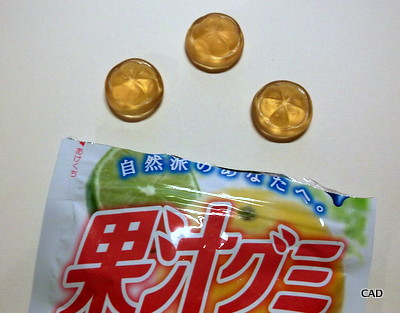 Cameron: Much less generic flavor. There is a lime on the packaging in the background as well, I think these might actually be a citrus blend rather than pure lemon. A bit softer than the other flavors, and a bit stickier.

They have a slightly chemical hint to them unfortunately, but overall they taste very much like the “dry” lemon flavor that is super popular in Japanese beverages right now (which is a bit tarter and much less sweet than American lemon flavored beverages). OM

Meredith: I thought these totally smelled like CC Lemon (side note: Japan spoiled me forever in terms of deliciously tart citrus soda) but tasted a bit over-sweet and medicinal, like pinesol or a bottom-shelf whiskey sour. I’d still give it an O for soda nostalgia, though! 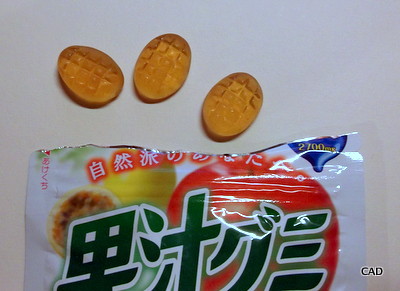 Cameron: These actually taste more like apples to me than mango. You don’t really get mango out of them until the aftertaste. After closer inspection, could that be an apple on the package, behind the mango? I think so.

Mango is such a hard flavor to capture in candy, and these certainly don’t excel at it. Like the rest though, they’re certainly not bad candy… just, uninspired. O

Meredith: While I agree that these gummies don’t really taste like mango, I didn’t get apple either.  If I didn’t know they were supposed to be mango, I’d call them magnolia gums.  They’re really floral and perfumey, which was unexpected but pretty tasty in their own right. O

We’ve got a couple more gummies to cover – that post will run on Friday.