First 3 Parts on Russian Candy can be found here:

More reviews from the ginormous box of Russian candy sent by my friend Leslie nearly a year ago. Don’t worry; the tasting was done back when they were more fresh out of the box (though I still have a few remnants of her box left). 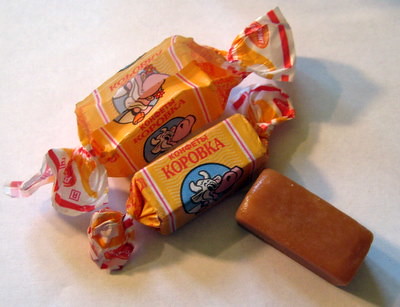 What I called “Cow Caramel,” this was caramel-flavored candy that tastes of mildly sweet caramel but has the texture of something completely different. It was grainy and broke up in my mouth, almost like a fudge, but not as creamy. The taste/texture disparity threw me a bit, and I found it overly sweet. An O.

This candy was WEIRD! It had a spongy marshmallow center surrounded by chocolate shell. The texture of marshmallow is terrible! The red version (left) had a weird aftertaste – definitely not of vanilla – that made me feel ill. Like nauseated ill. There were these weird sugar granules between chocolate and marshmallow that didn’t help matters. I don’t know if those were supposed to be there or if they were a product of the various temperature changes this candy went through.

As the taste of a candy attracts the customers towards it similarly the best candy maker matters a lot for its preparation. You can find the best cotton candy maker from bestadvisor where all the brands are decorated by an amazing way

The brown-checked version (right) was slightly better. The texture of the marshmallow was less spongy, but it still fell short of being pillowy. Thankfully, this had no weird aftertaste and no sugar grains, but I still didn’t enjoy it. Another O. 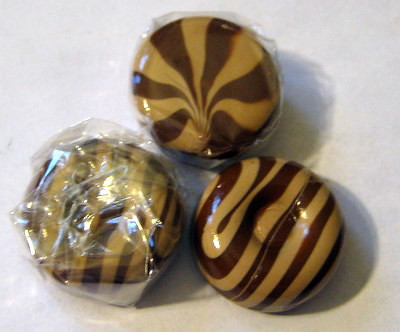 These individually wrapped lovely hard candies had gorgeous light and dark brown swirls, like a Cream Saver. The coffee taste was strong and definitely present, but it wasn’t at all bitter. Also like a Cream Saver, the candy had a light, creamy finish. It cleaved cleanly, which of course meant I was chomping it to death. I’m not a big fan of coffee flavored candy, but my mother is, and she’d love this. An OM.