Part II of many of my series of Russian candies courtesy of my friend Leslie. This week will be Russian candy week, but the series will extend beyond that.

On these Leslie writes, “My dictionary calls iris ‘taffy,’ but I’m not sure that’s quite accurate… Kis-Kis means ‘Here, Kitty Kitty.'”

I called these candies cat caramels in my notes, so Leslie has a point when she says they’re not quite taffy. They do have the texture of taffy, as it cleaves but is also sticky and chewy. In fact, the more you chew it, the stickier and chewier (and more stuck in your molars) it gets. It tastes like molasses, with dusky sugar flavors without any overt bitterness. An OM for this tasty treat that Leslie likes to buy at the open air market and eat on the way home.

I’m guessing that RotFront in Russian doesn’t have the same meaning as it does in English. Apparently, no one Leslie knows could tell her what this is made out of, but they all love it.

It looks like a Tootsie Roll, but it’s completely different. Instead of being chewy, it’s grainy and breaks apart in the mouth. The flavor is pleasantly nutty and reminds of the Chinese crumbly peanut candy from my youth. Leslie thinks the nuttiness may come from sunflower seeds, but she’s not sure. I can’t figure it out either, but I still liked it. An OM. 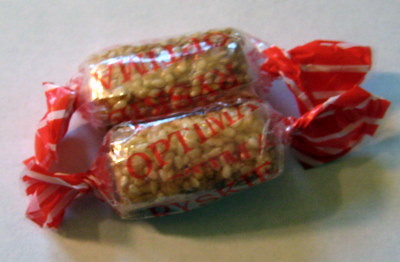 These are actually Polish, so Leslie doesn’t know what the name translation would be. The candy is basically just sesame seeds in a sugar glaze. It looks like it would be brittle but is actually chewy and did a fine job of sticking in my teeth. I enjoyed the toasted sesame flavor, which is quite strong, and gave it an OM. I think there’s a Chinese candy that’s similar to this.

This is part 2 of a 4 part series on Russian candy. Next up: