For some reason, this post disappeared after I wrote it the first time. It was originally supposed to publish after Russian Candies I and II but instead published as blank nothingness (much to the disappointment of Leslie, who gave me the candy in the first place). Fortunately, I still have my tasting notes, so I can recreate the review.

I think Dove really needs to rethink the packaging on this one, as I noticed neither the lemon nor the coffee on the box. The coffee bean blends right into the chocolate, and the lemon looks like it’s just an extension of the yellow satin. What if some poor little Russian child or Russian tourist who can’t read Russian mistakenly bought this? He or she would be in for a flavor surprise. 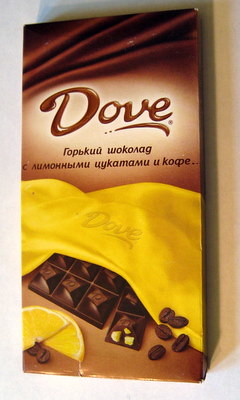 All that being said, the flavor combination of chocolate, lemon, and coffee worked better than I thought it would. The bar had a crisp snap to it (and a slight bloom, but hey, it flew from Russia to Ohio to Texas to Connecticut. Stuff happens), probably because it’s quite dark, and little bits of grit from the coffee beans and dried lemon bits. 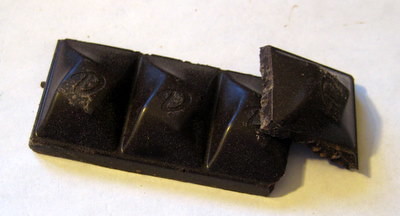 Upon first bite, the lemon flavor really smacks you in the taste buds. It tastes like super sweet candied lemon zest at first, then gives way to a coffee finish with a slight bitterness to it. It’s an interesting flavor combination that some of my friends loved, but it wasn’t quite for me. An OM.

Leslie calls this one “exotic dictatorship chocolate” because it was made in Belarus. I really like aerated chocolate because it’s such a unique textural experience, and I was excited to try this one, as I’ve never had a dark aerated bar before. 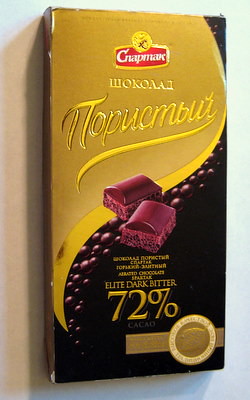 The bar was quite glossy and dark. At first, it tasted quite dry, and unlike milk aerated chocolate, it doesn’t melt in your mouth very well. The chocolate itself was a bit on the sweet side for dark chocolate and had a slightly musty finish. Also an OM. 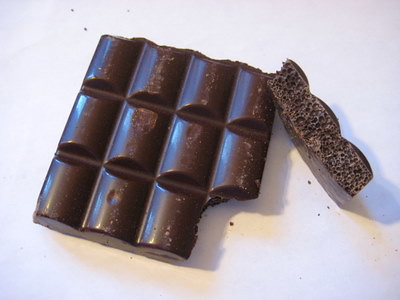