My friend Leslie was kind enough to mail me a giant box full of Russian candy back in December, and I’ve since been slowly tasting my way through everything. Candy blogging, at least the way I do it, is a Sisyphean task, only I get to eat lots of sweets instead of pushing a boulder around. I know, I know. My life is so hard. Here’s the first of my long overdue, many-part series on Russian candies.

First up, a series of what Leslie calls “the heart and soul of Russian candy, with its fake chocolate glaze and weirdly-folded, artistic wrappers. There are several other varieties… Bizarrely, all of them come from different candy factories all over Russia. The wrappers are always the same color… and the artwork is always similar. Apparently, there’s no trademarking going on.” 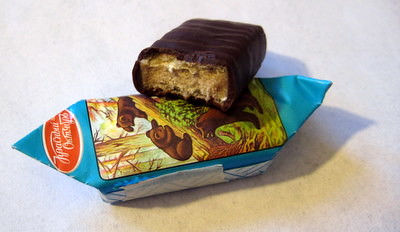 The affectionate name for bear cub. A dark “chocolate” covered crisp innards topped and bottomed with a stale wafer. I don’t know if they’re usually stale, as they’d been sitting around for a long time before I got to tasting them. The innards were made of a sugary, slightly chocolatey solidified paste of some sort that gave it a sweet finish. 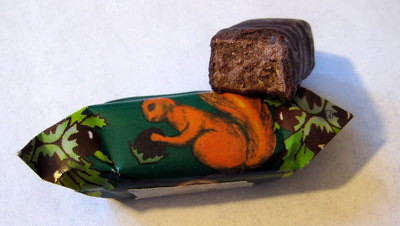 The same dark “chocolate” shell around a crumbly filling composed of chocolate and hazelnut (I think; it could have been pistachio) bits. Also a sweet finish. 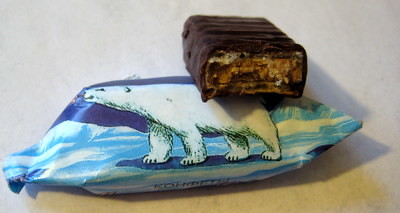 Mikey in the North

The same dark “chocolate” shell and paste of Pigeon-toed Mikey. In this version, the wafers completely box in the filling, so the overall candy is both thicker (in

The same dark “chocolate” shell and paste of Pigeon-toed Mikey. In this version, the wafers completely box in the filling, so the overall candy is both thicker (in crunch) and airier (in texture).

Overall, I ate one of each all at once, which was a bad idea. They’re super sweet, and the fillings don’t exactly melt away, so I felt ill afterward. An O, but on the high side because they get bonus points for novelty. 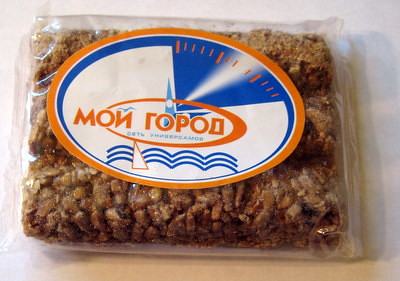 
Excuse me a second as I try not to drool into my keyboard just reliving what it was like eating this stuff. It’s like peanut brittle but made with sunflower seeds. Lots and lots of sunflower seeds jammed in very little brittle made the thick bars hard to crunch through, but I still powered right through half the package. I wish it came in thin slabs like peanut brittle, if only to slow down my consumption of it. Simple, delicious, and ZOMG! worthy. I wish I had more and miss it so… 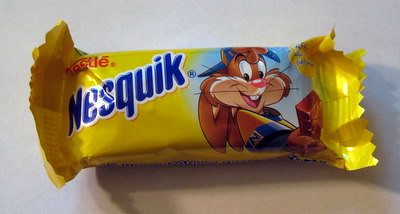 Leslie calls this “a ubiquitous European candy bar marketed towards children.” It’s a sweet milk chocolate coating over a top layer of white, crunchy… something and sweet chocolate nougat. The mysterious top layer tastes like a wafer but doesn’t have the mouthfeel of one, while the nougat layer is like a more dense 3 Musketeers filling. It’s a little sweet for my taste, so I give it an OM. 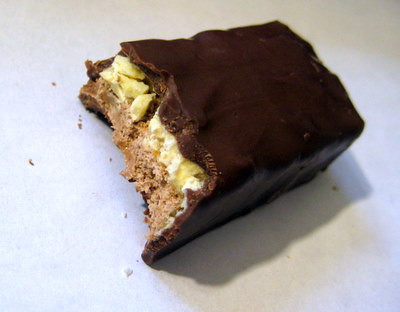 This is part 1 of a 4 part series on Russian candy. Other posts here: