This Cadbury Starbar‘s been floating around in my tasting notebook since I had it last summer while I was in England. It was on my list of candy bars to try while there, thanks to a favorable Chocablog review.

The Starbar is “shot through with peanuts and caramel,” which made me think that it would be a Snickers-like bar. Well, not exactly.

The milk chocolate coating (14% of the bar) was greasy. Immediately under the chocolate was a circular layer of gooey, sweet, and sticky caramel. A few salty peanuts studded the nougat, but they were few and far between, not exactly “shot through” with peanuts. 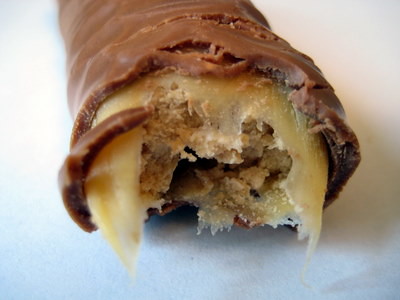 I think there were also little wafer bits inside the sweet nougat center that weren’t advertised on the wrapper. I don’t know why not, as it’s a nice feature. It provides an enjoyable textural contrast that gives this bar an extra edge.

I was disappointed by the lack of peanuts but pleasantly surprised by the wafer bits. Not sublime, but pretty good for a mass-produced bar. An OM.