As I’ve noted before, one of the many perks of being a candy blogger is that friends who travel to exotic places often bring me back candy presents. My friends Ariel and Logan returned from a mini-vacation in Bermuda with a couple of candy gifts for me, including this Cadbury Time Out.

The wrapper described its contents as 2 milk chocolate covered wafer fingers with milk chocolate centres. The obvious comparison here is with Kit Kats. In fact, I found these to be even better.

Each finger was about five inches long and less than half an inch across. I was happy that they came two to a package, though I sort of wish there were more. Because I already ate them both (in two sittings, at least). 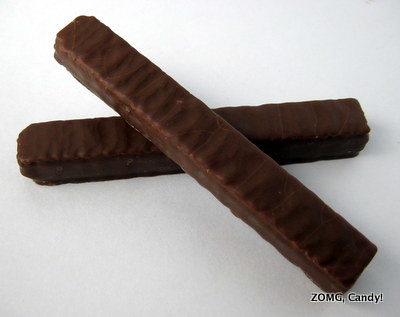 The wafer cookies were crisp and toastier than Kit Kat’s version. Instead of the cream that Kit Kats have, the two wafer cookies sandwiched a layer of folded chocolate, which made the Time Out taste really rich and chocolatey. 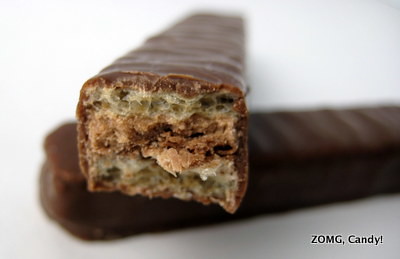 The chocolate was the best part. It had a surprising complexity for a mass-produced bar, lots of bittersweet coffee notes that kept it from being overly sweet. Instead, it tasted like a well-balanced, grown-up treat. An OM.