Did you know that Skittles are different in the UK and the US? When I say Skittles, I mean standard Skittles, not random limited edition/non-standard Skittles that are so varied that I have trouble keeping track of them. In the US, standard Skittle flavors are red – strawberry (I think), purple – grape, yellow – lemon, green – lime, and orange – orange. Friends of mine already know that I only eat the three citrus flavors (I usually don’t particularly care for red and purple candies in general) and pawn the red and purple ones off on them. 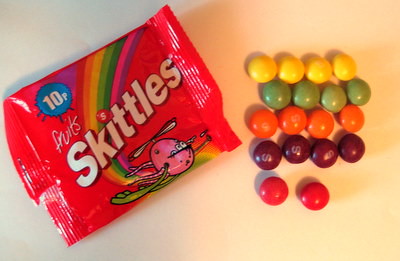 In the UK, the purple ones are blackcurrant instead of grape. The other color/flavors remain the same, but they taste and look different. As you can see in the above photo (I apologize for the poor quality; I blame the lack of natural sunlight in rainy England), UK Skittles are more muted in color. It’s especially noticeable in the green ones.

I bought two tiny 10 pence bags of Skittles. The first bag contained no red ones, and the second contained only two. Maybe it was just coincidence, or maybe they make fewer red Skittles in England. The red ones tasted, well, red, and as best I can remember, they seemed pretty much the same as their US counterparts. Lime was also similar, but I swear the orange was zestier and the lemon sweeter and less sour across the pond.

About that different flavor…

And the one you’ve all been waiting for (I’m guessing, as it’s the one we don’t get here): blackcurrant. Blackcurrant is a pretty popular fruit flavor in the UK, and for good reason, I think, as I enjoy it. It tastes similar to grape but has these darker raspberry undertones that make it more interesting. Overall, I give the UK Skittles an OM. I’d buy them again if I could conveniently do so. Then again, US Skittles are pretty good too, as long as you have friends on hand who’ll eat the flavors you don’t like.

2 thoughts on “UK Skittles – Are They Different?”