I’d never heard of Frey branded chocolates until I saw them in a Target. They caught my eye because they were on sale, 3 for $5, so I thought it was a great time to give them a try. I bought a tiramisu bar, a plain dark bar, and a chili bar because I love tiramisu the dessert and was curious as to how it would translate to chocolate, because I’m planning another chocolate tasting party soon, and because I love chili chocolate. Yum! 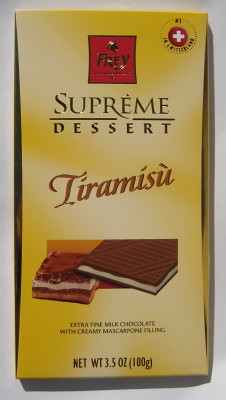 If you didn’t know, tiramisu is an Italian dessert (now pretty ubiquitous in restaurants of all kinds of cuisine) made of lady fingers soaked in liqueur and coffee and layered with marscarpone cheese and cream. The paperboard outer wrapper claims “extra fine milk chocolate with creamy marscarpone filling.” See what’s missing there? The coffee and the liqueur (and the ladyfingers, but I see those more as a flavor vehicle)!

The pre-segmented bar was super, super greasy and carried quite the fatty sheen. Even at room temperature, it was soft and pliable, so that it bent and ripped instead of snapping and breaking. The second ingredient listed is palm kernel oil, which explains the texture and the whoa high saturated fat content. When I rewrapped the rest of the bar for later sharing, there was a grease spot on the paperboard. 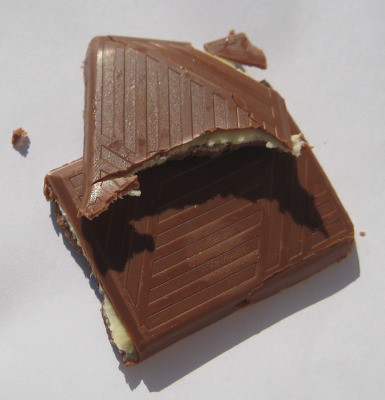 The bar consisted of milk chocolate sandwiching that white marscarpone filling. The quality of the chocolate was only so-so; better than Hershey’s but nothing to crow about. It did pair nicely with the slightly cheesey (think cream cheese, but a bit tangier) marscarpone filling, which makes me rethink the cheese-filled Zotter bar that I’d passed on.

I was disappointed by the lack of boozey notes or coffee notes and put off by the serious greasiness of the bar. It tasted pretty good, but I’m going to give it an O because I know other brands make tiramisu bars, and I’d like to try their take – I think Frey’s tiramisu chocolate could be easily upstaged. In the meantime, real tiramisu is better than this bar.

You can read Alicia’s take on the bar at her blog.

PS: Today is the first day of my last semester of classes as an undergrad. Eep!