Waaay back in 2008, I reviewed Amano’s then complete line-up of single-origin bars and gave them an enthusiastic ZOMG! They’ve since released a new Jembrana bar and updated their packaging with a shinier, artsier look. I was pleasantly surprised with a free pair of their newest bars for tasting. Apparently they’d kept my name and address on file from the last time I reviewed their bars, and boy was I glad that they did. 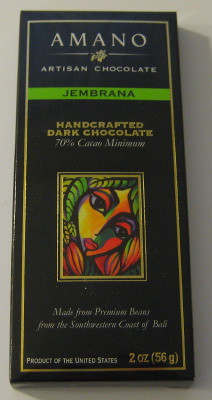 The press release claims as follows: “Amano Artisan Chocolate introduces a new, limited edition chocolate bar from Jembrana on the southwest coast of Bali. Like Amano’s other single origin chocolate bars, the Jembrana is made by hand, from bean to bar, in small batches with 70% cocoa… The Jembrana Single Origin Bar ($7.00/2oz) has a beautiful, rich chocolate flavor with nice fruit notes that are also a little nutty. The bar is rich and gentle at the same time, without any harshness or astringency.”

At it’s suggested retail price, Amano bars are pricey, but very few chocolate makers in the U.S. actually make their own chocolate, starting from cocoa bean scratch, and their bars are a tasting revelation. I took my tasting notes before I read the back of the box or the press release so as not to be influenced by their descriptions. 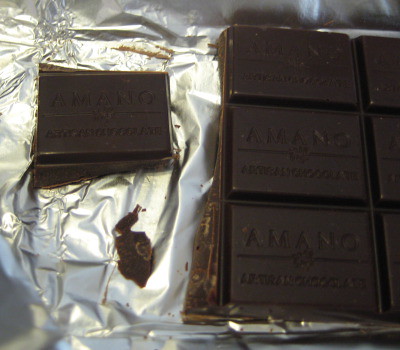 The chocolate was super smooth and creamy on the tongue but not in the thick way that milk chocolate melts. There were no dairy notes whatsoever. Instead, I got a rich chocolate with a hint of fruitiness in the finish, which was quite lovely and lingered just long enough. When I revisted the bar, I got more of an almond nuttiness in addition to that fruitiness. For those of you are wary of dark chocolate, I didn’t find the bar at all bitter, though I am a self-professed dark chocolate lover.

Altogether an excellent bar with a great flavor profile. I give it an OMG, as I think I lost some of the enjoyment in tasting it on its own without contrasting chocolates to truly highlight its flavor profile. And, if I remember correctly, I enjoyed the Cuyagua more. Still, a great bar. I have one left at school that I intend to share with friends, to spread the fancy chocolate tasting gospel. Save your pennies, and instead of buying seven Hershey’s bars, get this instead.