I have awesome timing – I just recycled my empty box of Trader Joe’s “The Art of Chocolate” truffles last weekend, and I’m noticing now, as I write this review, that I forgot to photograph the box. Oops. Photos of the box can be found on other sites here and here.

At least I nabbed photos of all the truffles! They come 9 to a box, and though they’re small, the whole box is just $1.99. 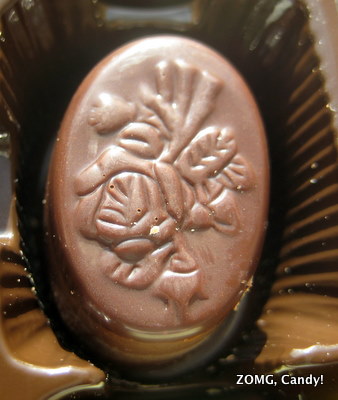 Three of the nine were filled with “praline, nougat”. One was covered in all milk (above); the other two had shells that were part milk and part white. The praline was slightly dry and gritty and tasted of sweet chocolate with a light undertone of nuttiness. It worked well with the milk chocolate, which had a nice cocoa finish, but it was too sweet when paired with the white. 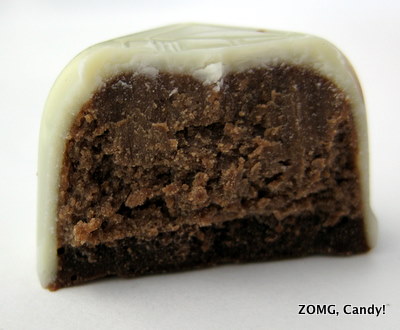 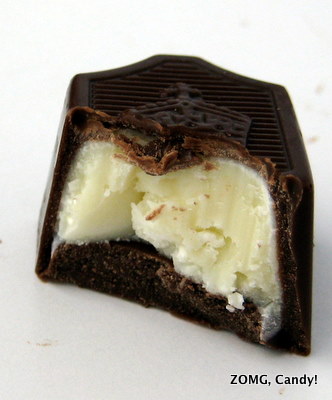 A milk chocolate covered cream and vanilla truffle (above; looks far lighter in this shot) had a thick milk chocolate shell with an overly sweet vanilla cream filling. The cloying sweetness made my throat itch. 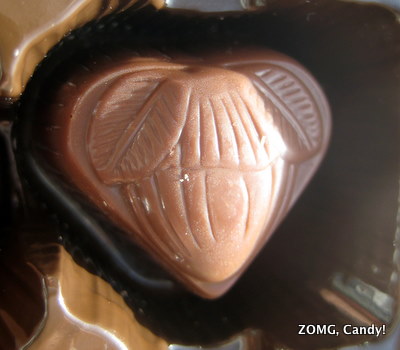 Crisp hazelnutpaste (sic) had my favorite molding, a pretty little triangle of a hazelnut, complete with veiny leaves. Its filling had a light, fine grit of ground up hazelnuts that I could hear against my teeth more than I could actually feel on my tongue. It was thick and nutty. It was also super sweet, but I could handle the sweetness here because it was tempered by the nuttiness. 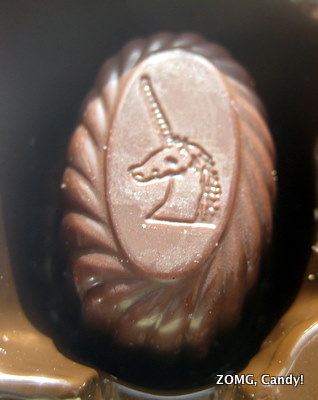 Cream and pistachio was an interesting and unexpected flavor combination for such a generic box. The dark chocolate shell was nice, and its filling was a dry white ganache flecked with light green. Despite the pistachio colors, I didn’t get any pistachio nut flavors. It did at least have a nice dusky caramel finish. 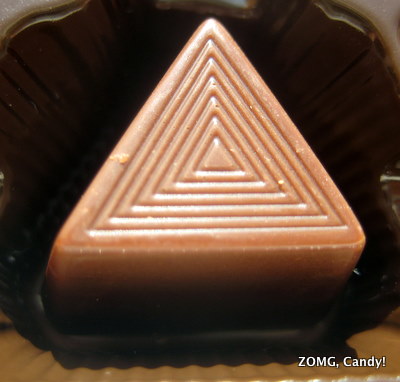 The Art of Chocolate was all about permutations: three types of chocolate (milk, dark, and white) and six different fillings, mixed and matched. Sounds like a candy math problem for Carl at Candy Dish Blog!

While not all of the combinations were stellar, this little box was a fantastic deal at just $1.99 (nice truffles can cost that much for just a single one!). The truffles are one bite indulgences that, at 3 truffles per 100 calories, are reasonable for the wallet and the waistline.

2 thoughts on “Trader Joe’s The Art of Chocolate truffles”