Trader Joe’s recently introduced a new line of Belgian chocolate bars {filled with} stuff. They made a big splash on my radar because one of them was {filled with} speculoos cookie spread, which is SO MUCH NOMS!, and my Trader Joe’s didn’t carry them and probably never will. 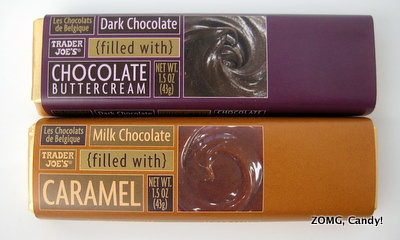 I think the full name of this bar is Les Chocolats de Belgique Trader Joe’s Milk Chocolate {filled with} Caramel. Why yes, those {} are rather silly. I shall now ignore them.

The chocolate bar was six conjoined segments of caramel-filled milk chocolate. There were a few tiny bubbles in the chocolate, but otherwise the surface looked smooth and matte. 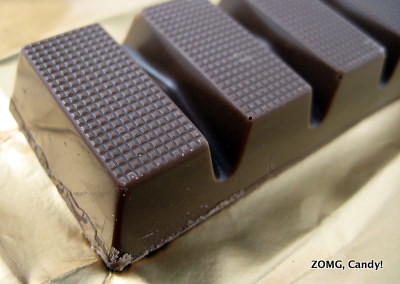 The milk chocolate was solid enough to bite into with a slight snap, and it had a thick and tongue-coating melt. The chocolate alone was quite caramelly with ?a dairy creaminess.

The center caramel was positively limpid. It was far too liquid to chew and just melted away on the tongue, leaving behind notes of scorched butter and sweet brown sugar. 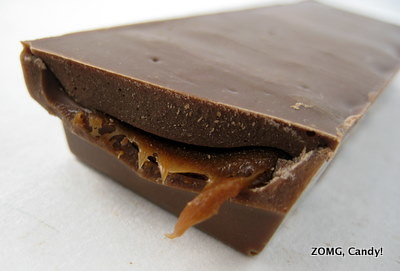 One segment of this was delicious, so I broke off a second segment. To corroborate my tasting notes, of course.

The second segment took the sweetness level over the top. What was nice took on a sour, throat-burning tinge. 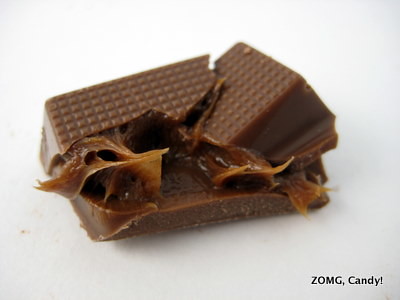 This is a bar to be savored one segment at a time. An OM if you can stop at just one chunk.