I’d never heard of Sour Jacks before I saw them at Sweets and Snacks earlier this year. It seems like they fight Sour Patch Kids for sour anthropomorphic candy gummi territory. I picked up free sample bags of their original Sour Jacks and their watermelon gummis at the expo. 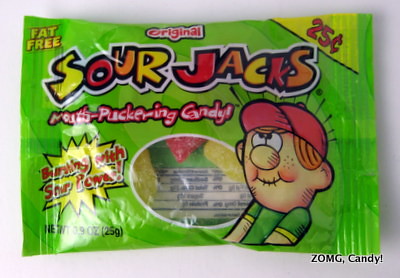 Sour Jacks came in orange, lemon, green, and red, like Sour Patch Kids do, and they were similarly covered in sour sugar. The Jacks’s sour sugar packed quite a puckery sting.

The Jacks differed, however, in their texture, which was not as chewy as Kids. Instead, they started off stiff, then softened and became a bit squishier and a little molar-sticking. 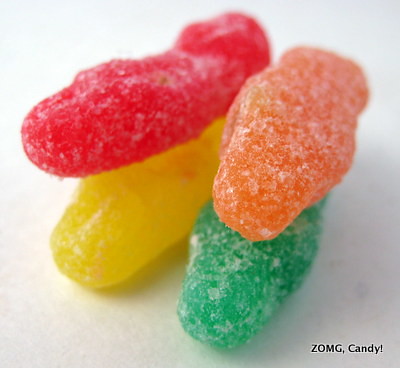 Orange was lightly sweet and citrusy with a brightly zesty finish. Yellow was lemon. Sometimes citrus candies end up tasting similar to each other, but this lemon was distinctively lemony with a strong edge of lemon zest. 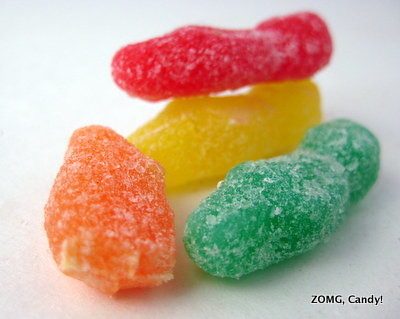 Green, on the other hand, lacked distinctiveness. It may have been lime, but it lacked any zestiness and only tasted vaguely citrusy.

Though green was blah, red was worse – it tasted medicinal and bitter. Hooray for artificial colors! I think it was supposed to be cherry? 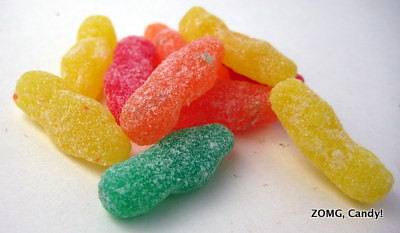 I really enjoyed the yellow and orange half of the mix, but I found green lacking and red repulsive, so let’s say it evens out to an O.