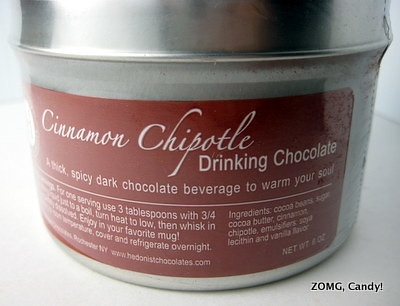 Hedonist described their Cinnamon Chipotle?drinking chocolate as “a thick, spicy dark chocolate beverage to warm your soul.” The directions were pretty simple: stir 3 tablespoons of the mix into 3/4 cup of very hot water or milk and enjoy.

The mix was made of bits of chocolate, cocoa powder, and cinnamon and chipotle spices. It smelled strongly of cinnamon with undertones of cocoa and a spicy smokiness. 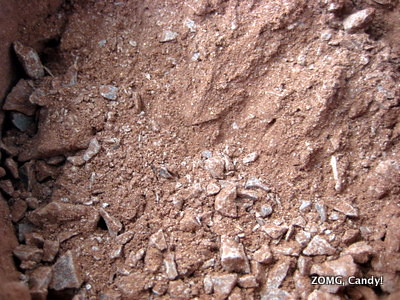 The thickness and richness of the resulting drinking chocolate is really up to you – just add more mix or less water to change the concentration. I wasn’t super careful when I made my cup. I used a mix of hot water and milk and just kept adding mix until the thickness was to my liking.

The drinking chocolate started off sweet and chocolately before the chipotle come through with a lightly smoky undertone and strongly spicy kick. Cinnamon, which was so strong in the scent, was less dominant in the flavor, where it provided just a light hint. Rich cocoa undertones played below the drink’s flavor profile. 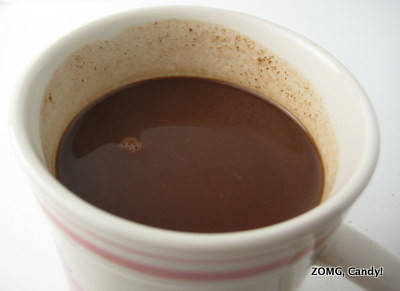 The chipotle definitely warmed up my tongue, and the tingling that it provided lingered for quite a while. This was not a drink for those who are scared of spiciness (for those people, I’d recommend the bittersweet version).

It was, however, a great drink if you love spicy chocolate. Turning the chocolate into a slowly sippable treat was a nice way to maximize the amount of chocolate enjoyment time that you get for your calories. 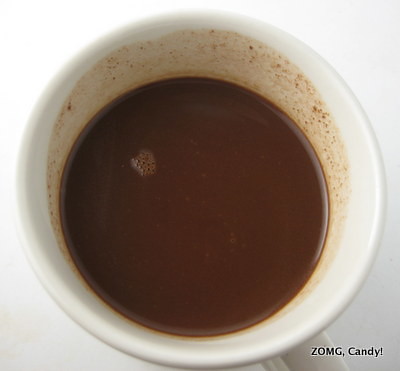 A $12 tin makes 5 standard servings, making it about a dozen times pricier than Swiss Miss?cocoa mix. BUT it’s infinitely better and feels like a really special gourmet indulgence. An OM.

If you’d like to try this or any of Hedonist’s delicious chocolates for yourself, or if you need to pick up some holiday gifts (the drinking chocolate tins would make great hostess gifts!), you can get 20% off your online order from now through December 1st with the coupon code ZOMG!

Do yourself a favor and nab some of their salted caramels while you’re there.