The two crispy rice wafer bars were wafer cookies sandwiching chocolate cream, topped with rice crisps, and enrobed in milk or dark (pictured below) chocolate. The wafer cookies were mostly bland and provided more texture than taste, while the crispy rice provided both, adding an airy crunch and a heavy, toasted flavor. The milk and dark chocolate were the same as that of the wafer rolls. If you need a flavor profile review, the milk was dusky and creamy while the dark chocolate was earthy with a fruity sweet finish. Overall, I found these to be a bit overly dry from their starchy components but still quite yummy. An OM. 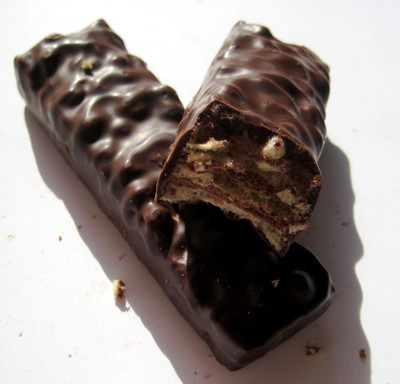 The peanut butter wafer bars lacked the crispy rice that topped the other two, so it had a less bumpy appearance and instead was all gorgeous, sumptuous ripples. The peanut butter was between the layers of wafer cookie and had a salty, creamy finish. It was not as nutty or as roasty as the peanut butter of the wafer rolls, which was a bit disappointing. On the plus side, it did nicely mitigate the dryness of the wafers, so much so that the bar feels overly rich. I give it an O, but I think peanut butter lovers would enjoy this more than I did. 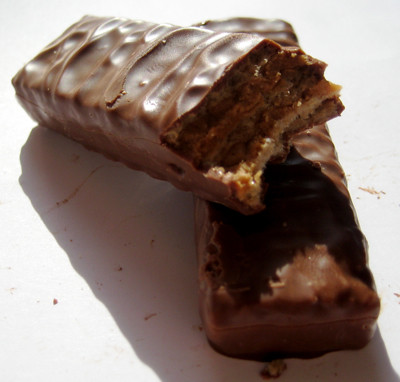 The Q.bel line-up, as a whole, did great, with the wafer rolls coming out on top in my book. On the one hand, I’m glad that Q.bel mailed me so many samples, as I’ve definitely been enjoying them and enjoying giving them away and hearing about how much others like them. On the other hand, I’ve been eating at least two packs a day, which is wreaking havoc on my waistline. I recommend trying them, but trust me, you don’t want to have a case of each lying around. The temptation is terrible.