I absolutely love Lindt’s Chili Chocolate bar, so when I saw their Cherry and Chili and their Hot Papaya (a papaya and chili) bar at the Lindt 5th Avenue store in NYC, I was super excited to try them. 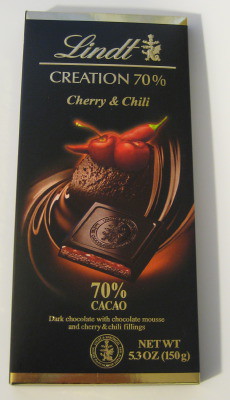 The Cherry and Chili bar is part of their Creation line. It’s a 70% dark chocolate with chocolate mousse and cherry and chili fillings. The packaging makes it look super luxurious, as it should, for this is more expensive than most Lindt bars (around $5 each, I believe). The chocolate bar itself is also fancier looking than other Lindt bars. Instead of just bearing an etching of the word Lindt, the Creation bar is also stamped with a complex rendering of their medallion logo. 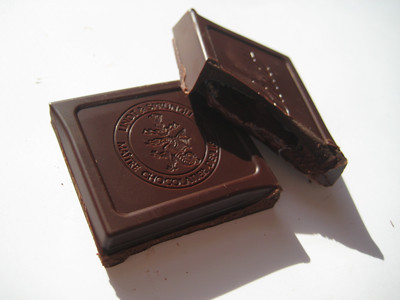 The cherry and chili filling comes in the form of an oozy, gooey, red-tinted gel. It initially tastes like sweet cherries before giving way to a spicy heat that makes your tongue tingle just a tad. The chocolate shell is Lindt’s usual quality chocolate – creamy with a dusky finish. I didn’t realize the bar was supposed to contain chocolate mousse until I saw it on the wrapper as I’m typing up this review. I guess it got swallowed up in the chocolate or something. I never noticed it when I was tasting it. 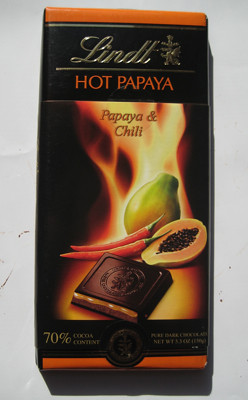 The Lindt Hot Papaya is basically identical to the Cherry and Chili, just with Papaya as the resident fruit goo. The packaging on this was a bit unusual, as it was a paper wrapper over the usual cardboard box. The writing on the outer wrapper was in English, while the cardboard was detailed in German (I believe; lots of umlauts), suggesting that the bar is imported rather than made in Lindt’s U.S. factories. 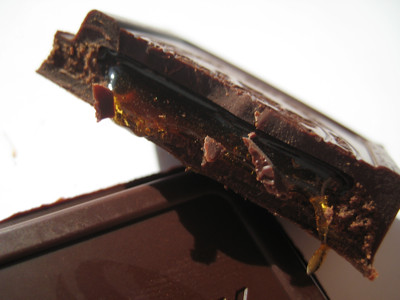 The fruit ooze in the Hot Papaya was a beautiful hue of translucent gold. Like the Cherry and Chili, it initially tasted of sweet fruit before the chili heat comes in, though I found the spiciness to be more prominent in this bar. I thought it tasted like pear, but, like most Americans, my pear experience far outweighs my papaya experience. The only time I’ve ever had fresh papaya was in the summer of 2007, when I was on tour in Brazil with the Yale Concert Band, so my memory of how papaya’s taste is shaky to non-existent, making me a poor judge of how true this is to papaya’s real flavors.

All in all, I really enjoyed these two bars. Their higher price makes them a splurge, and I’d still rather eat Lindt’s straight Chili chocolate bar, but the Cherry and Chili and the Hot Papaya are unique and tasty enough to merit an OMG.