The long-awaited continuation of my chocolate tasting quick hits from last week: 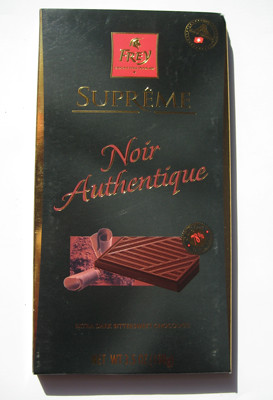 Frey’s Noir Authentique was the third of the three Frey bars I bought on sale at Target (the other two being their Tiramisu and Hot Chili Pepper). It had a nice nuttiness but a slightly bitter aftertaste, and its creamy melt gave way to an astringent finish. Altogether not bad, but there are better dark bars out there that are more interesting. Just an O. 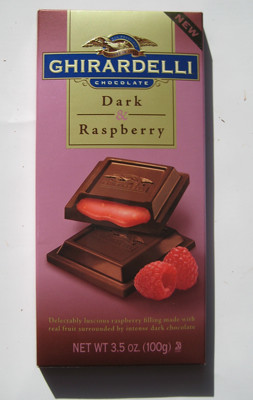 Ghirardelli’s dark and raspberry is another one of their new products, a molded and filled bar. The paperboard wrapper promises “delectably delicious raspberry filling made with real fruit surrounded by intense dark chocolate.” It’s actually kind of terrible. The filling is a horrifically unnatural shade of pink… 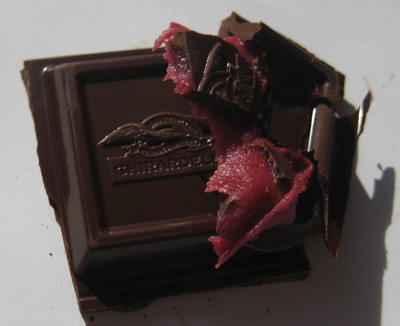 and it tastes as bright and artificial as it looks. It’s overly sweet and cloying, with a fake raspberry flavor that completely covers the dark chocolate flavor of the shell. A —. 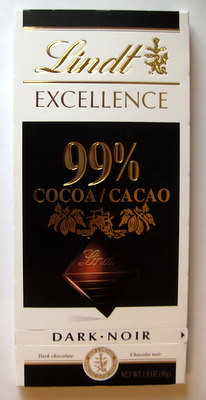 I always like to end my tastings with a 100% bar to show that percentage isn’t everything. This time, I ended on a 99%, figuring what’s 1% between friends? The Lindt 99% bar was impressively packaged and heat sealed inside a gold tray. Despite the care, my bar was still somewhat bloomed. 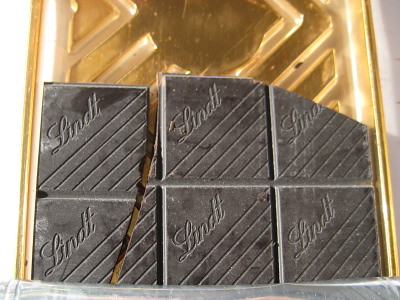 As expected, the high percentage made it dry and chalky and bitter. It was so astringent that it sucked the moisture right out of my mouth. Underneath all that, there was an earthiness to the flavor. Still, I’ll never see extreme percentage bars as more than a fun tasting adventure; they’re just too intense for snacking. A —.

I threw a chocolate tasting party ages ago and have been sitting on these tasting notes since then. Today, some...