According to Wikipedia, “Jaffas is the registered trademark for a small round sweet consisting of a soft chocolate centre with a hard covering of orange flavoured and coloured confectionery. The name derives from the Jaffa orange. The sweet is part of Australian and New Zealand cultural folklore.”

Until I looked it up, I was more familiar with Jaffa in the form of Jaffa cakes, orange mini cakes dipped in chocolate that I saw in the U.K. My Lee’s Jaffa Bar was bought at a Randall’s in Austin, TX (I also bought a Lee’s Chocolate Mint at the same time), but the wrapper says that it was made in Scotland.

The wrapper describes the bar as “Jaffa Orange Flavoured Fondant Coated in Dark Chocolate.” The “flavoured” is an import indicator, by the way. The orange fondant was dense and almost crumbly. I saw almost because it doesn’t exactly crumble; it disintegrates. 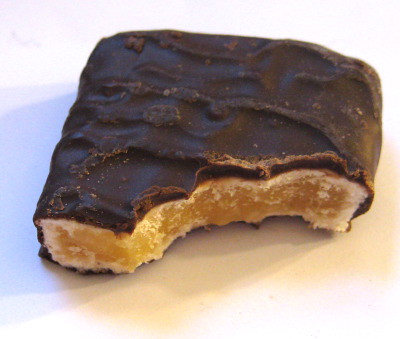 The fondant reeked of super artificial orange flavor. Instead of being lovely, bright, and citrusy, it was overly sweet and floor cleaner-y. The thin dark chocolate coating was completely overwhelmed by the fondant and couldn’t fight back enough to at all mitigate the sweetness of the fondant. Sadly, this bar gets a –.