I love Altoid’s Sours, and I will eat them until my tongue goes numb. When I saw that Walgreen’s sold a knock-off version called Zip Sours for $1 a tin, about half to a third the cost of Altoid’s Sours, I decided to give them a try. After all, they were cheap, so there wasn’t much to lose.

The Zip Sours came in “black cherry” and “orange splash”. Never mind that one of the halved oranges on the “orange splash” tin looks more like a grapefruit. 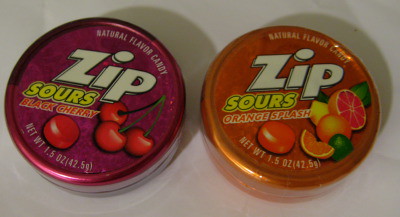 I found the Zip Sours to be lacking in both zip and sour. Orange splash had a bright, citrusy flavor and presented a reasonable imitation of Altoid’s Tangerine Sours, just without the sour part. My orange splash sours were also a bit damp, despite the foil seal under the Zip Sour tin lid. I should note, however, that I find the same issue cropping up with Altoid Sours, where the candies tend to stick and clump a bit due to dampness. 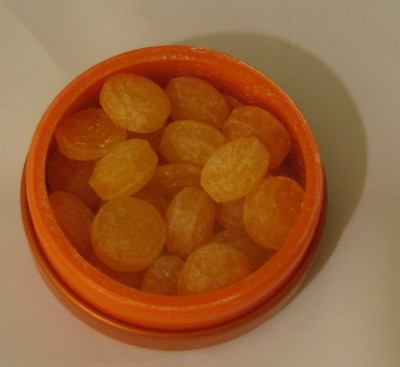 Black cherry was less yummy, as it carried a dark, medicinal tinge to it, though at least my black cherry candies were nice and dry, as hard candies should be. Still, flavor-wise, I didn’t care for them.

The Zip Sours tins are slightly smaller than those of the Altoid’s Sours, but I still think you get more candy for your money. I give black cherry an O and orange splash an OM. While they aren’t that sour, the orange splash flavor was nice, and I ate so many of them in a row that my mouth eventually went numb. Apparently there’s some sour there after all; it’s just not that noticeable to the palate.