I think Guylian truffles gave me my first taste of good, high quality chocolate. A friend’s mother gave me a small box of their seashell truffles when I was in middle school. For a kid who had never had anything nicer than regular candy bars, it was a creamy, hazelnutty, chocolate revelation. I picked up this Guylian Praline bar in England with high hopes. Would it be as good as the more expensive truffle version? Or even better?

Sadly, not so much. Just upon unwrapping the bar, I noticed a quality issue – mine had bloomed a little. That could have been a product of its transatlantic flight, or it could have been sitting on the shelf at Sainsbury’s for too long before I bought it.

I did, however, appreciate the inlaid white and dark chocolate swirled sea shells and sea creatures, which were reminiscent of their truffled counterparts. The bar would have been gorgeous had it retained its original sheen. 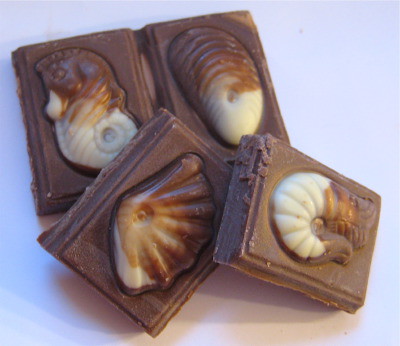 The Guylian Praline bar was a belgian chocolate with praline filling. It had a lovely hazelnutty flavor with a sweet but not cloying milk chocolate finish. Sadly, the texture on my bloomed bar was all wrong. There was no melt whatsoever. Instead, the inside of the bar was dry and generally unpleasant. And because we eat with several senses, an off-putting mouthfeel ruined the bar from me.

My bloomed bar gets an O. Still, it deserves the benefit of the doubt – has anyone had a not bloomed bar with a better textural experience?

According to Wikipedia, "Jaffas is the registered trademark for a small round sweet consisting of a soft chocolate centre with...