I received a beautiful little wooden box of L.A. Burdick’s Chinese New Year truffles from my Associate Master. I thought the exquisite packaging, with the red ribbon and gold wax seal (the character, fu, is for good luck, though it’s traditionally hung upside down for the holiday) was because it was a special Chinese New Year’s box. A quick spin around L.A. Burdick’s website reveals that they sell their chocolates in the gorgeous wood boxes year round, making them unique and impressive for gift-giving. 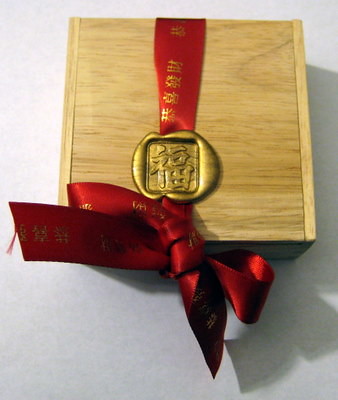 I was struck by how tiny each truffle was. Most of them are thin (in other words, there’s not much height to the truffles), making them perfectly sized for tasting. I went through about a third of the box before sharing them and was able to rationalize my gluttony because the chocolates were bite-sized. They were all covered with a thin chocolate shell, and though they were little, they packed a big, flavorful punch.

The Chinese New Year’s box, which is no longer available, contains a special assortment of “Chocolate infused with the subtle and complex flavors of Asia. Featuring: Plum Wine Brandy, Lemongrass, Green Tea, Mango, Ginger, Cashew Sesame, Lapsang Souchong & more.” Unfortunately, there was no guide as to what was what, so I was left to guess at the various flavors. 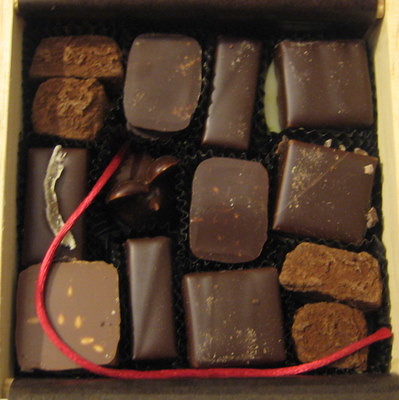 I’m guessing that the middle left truffle topped with a strip of candied lemon zest is lemongrass, even though lemongrass only tastes like lemons. The ganache in this one tasted sweet and citrusy. Then again, it could have been candied ginger on top, in which case it would be the ginger truffle.

The square version of the knobbly cocoa powder dusted truffle also had a citrusy ganche. The other knobbly truffle, which was long and rectangular, had a sweet yellow liquid filling, like a cordial. Perhaps one of those knobbly ones were supposed to be the Mango?

The bottom left truffle is probably cashew sesame, as indicated by the sesame seeds it is studded with. I tasted it without realizing that it had cashews in it, so my notes declare it to be nicely hazelnutty. There was also a chocolate covered square truffle with a white ganache that tasted like hazelnut to me.

The most notable truffle was the flat rectangle (in the photo, it’s to the right of the mouse). It tasted earthy and incredibly smoky. It turns out that lapsang souchong is a black tea dominated by smoky flavors. The truffle works, kind of like how bacon chocolate works. And, like bacon chocolate, some people loved it while others hated it (there were several in the box, so I was able to share). 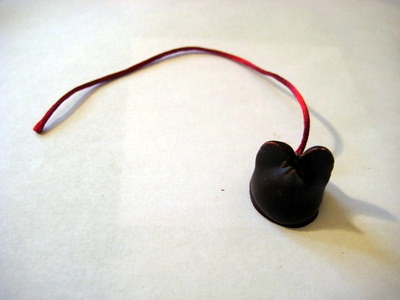 The final chocolate worth noting was the adorable chocolate mouse truffle, a signature of L.A. Burdick. The poor lighting in my photo really doesn’t do it justice. How convenient for L.A. Burdick that this year was the Year of the Rat! The entire mouse is covered with a super thin dark chocolate shell. The ears are thin almond slivers, and the body is comprised of a non-creamy ganache. I thought it tasted sweet and winey. According to the website, it’s a dark chocolate and orange ganache.

Overall, an OMG. I wish they came with some sort of guide to what each chocolate was like their regular boxes do. I got to taste some of the regular box at my college’s tasting party, so I’ll have notes on that at some point.