Michael Recchuiti is an American chocolatier who creates elegantly sleek and beautiful truffles. I stopped by his shop (also elegant and sleek, with a predominantly brown and gold scheme and employees dressed all in black) in San Francisco’s Ferry Building. His confections and boxed chocolates are extremely pricey, so I only bought two truffles from his extensive range. It was so hard to choose just two! 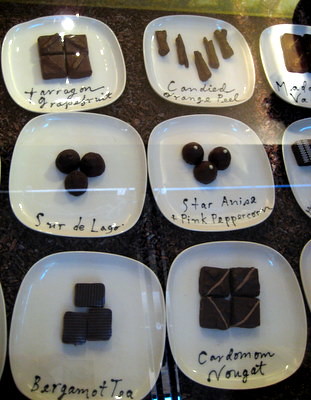 I definitely could have used help making my truffle selections, and I now regret not asking for it. The store was packed when I got there, and I got a snobby vibe because one of the employees ignored me when I was standing right in front of her and instead addressed the two well-attired gentlemen behind me. That kind of snubbing isn’t exactly inviting. I also would have bought more than just two truffles had I known that the chocolates are sold by weight when you pick them out individually, which makes them cheaper than when they come in prepackaged boxes. But because no one offered to help me, that was never explained to me.

I ended up choosing a honeycomb malt (left) and a star anise & pink peppercorn (right). I love malted milk balls and will eat Ovaltine malt straight, so I was excited about the honeycomb malt. It turned out to be a sweet, honeyed truffle filling with a soft chocolate coating. The filling looked a bit grainy but was actually quite silky. However, it was not as thick and creamy as richer ganaches are. The honeyed flavor of the filling was nice and smooth, but there was no malt taste that I could perceive, which disappointed me. If I didn’t know the name of the truffle, I’d give it an OM. Because it’s called a honeycomb malt and there was no malt, it only gets an O.

The star anise and pink peppercorn carried a slight hint of anise that sat nicely in the back of my throat. I don’t like licorice, so I found the light anise touch to be just right. There was a hint of pepper without any burn. No suggestions of pink (or if there were, I wouldn’t be able to tell, as I don’t know how pink peppercorns taste different from black ones). The ganache, like that of the honeycomb malt, also had a more liquid viscosity than most truffles. This one gets an OM.

I’m choosing to give Recchuiti the benefit of the doubt here because I wanted to like the shop and the chocolates more than I actually did. I felt pretty “meh” about the two truffles I bought, but those are only two truffles out of his extensive line. And even though I didn’t rave about the truffles I got to taste, I do recognize that they are well-crafted and of a high quality. I’m not going to make a special pilgrimage to California just to visit his shop again, but if I came across Recchiuti truffles elsewhere, I’d give them another shot.