More from Emily’s holiday lineup that I received after the holidays (thanks a lot, Fed Ex). On Monday we had pecan halves. Today, we’ve got graham crackers. Beautifully enrobed in milk chocolate and individually wrapped for freshness graham crackers, that is. 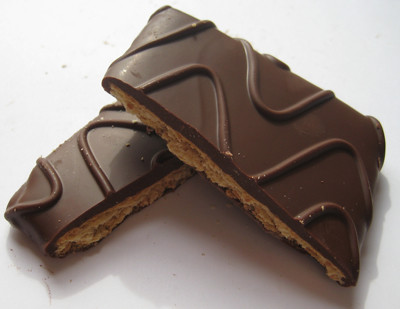 Like the pecan halves, these guys are simple, yet tasty. The milk chocolate layer is pretty thick, nearly as thick as the graham cracker itself. But because graham crackers are light and airy, the chocolate is far heavier. Though I love Emily’s milk chocolate – it has a nice thickness to its melt and a lovely dairy finish – I wish the graham cracker was a bit more assertive here. It could have provided more nuttiness or something. Instead, it mostly just added a nice crunch and grain.

This straddles the border between an O and an OM. I’d definitely eat it again and again, but I just don’t think I’d buy it, especially since Emily’s makes other stuff that I like better. After revisiting my rating scale explanation, I think it merits an OM, but with the aforementioned caveats.