I’ve been wanting to try Zotz ever since I read about them on Candy Addict. As is the case with most retro candies, they’re rarely as good as their reviews claim they are. Nostalgia is a powerful force for inducing bias. But, while Zotz are no candy revelation, they were still pretty good and definitely worth their pretty cheap price. I bought a bunch when I was at Economy Candy, where they were 12 for $0.75 (they come in strings of 4, and I think those were 3 for $0.75), if I remember correctly. 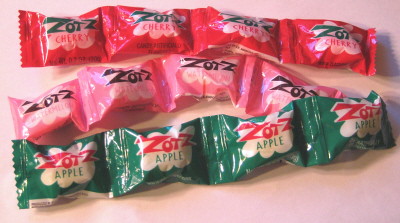 Economy Candy had them in cherry, watermelon, and green apple. Some pictures on Amazon seem to suggest a lemon flavor that may be floating around somewhere, but I think if lemon existed, Economy Candy would’ve had them.

The watermelon was sweet and fruity – different from the usual Jolly Rancher hard candy-style of watermelon flavor, but good. 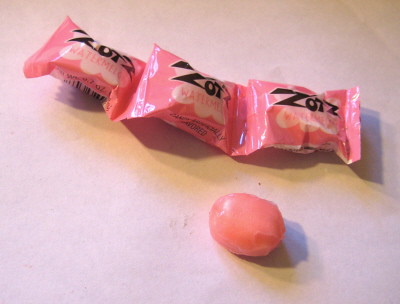 The cherry Zotz was darker than the watermelon, both in color and in taste. Interestingly enough, as you can see from the picture, it was more pink than red. Like the watermelon, the cherry was different from the usual Jolly Rancher hard candy-style flavor. Unlike the watermelon, it wasn’t exactly pleasantly different. I can’t put my finger on why; no cough drop cherry taste issues or anything like that. I’m not a huge fan of red candies, so that may have been part of it. 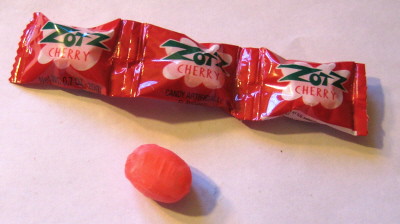 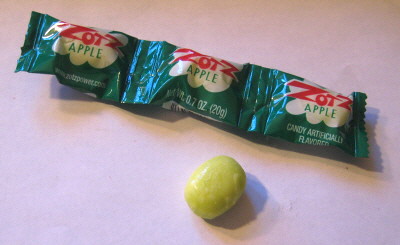 Zotz are all very smooth in taste and texture and contain an ample amount of fizz. The fizz is supposed to be sour, but I found it not so much sour as “burns your throat”. But in a good way, believe it or not. Unlike the Jones Soda Candy, the Zotz fizz is really in your face (or on your tongue, I guess) and leaves you foaming in the mouth. It’s a pretty awesome mouthfeel experience. I loved giving these to my friends, not telling them what Zotz are, and watching their surprised but pleased reactions to the fizz.

The candy itself doesn’t taste extraordinarily good, but the fizz component elevates Zotz to an OM.

Try them and rate them yourself!