The final chapter of the 1/2 week of “chocolate marshmallow cup type candies” is the Mallo Cup .

The Mallo Cup smells intensely of chocolate and coconut. Coconut? It doesn’t advertise coconut on the wrapper, but checking the list of ingredients reveals that the Mallo Cup does, in fact, contain coconut (incidentally, it also contains more corn syrup than sugar. Yikes!). I don’t mind that the coconut is there in the “whipped creme center”, but I think Mallo Cup should display the inclusion of coconut more prominently on the wrapper, as many people don’t like the taste of coconut. My second Mallo Cup went to waste when I happily bestowed it upon a friend to try, promising her that it was tasty. She took one bite and blanched – not a coconut fan. 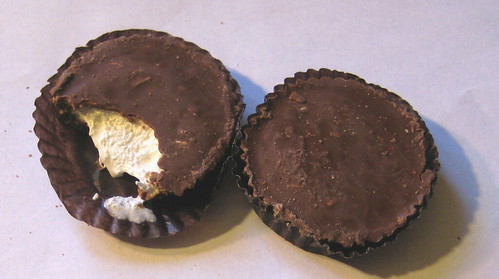 I found the chocolate of the Mallo Cup way too sweet, and it’s coconut isn’t as nice and toasty as that of the Cup-o-Gold. I managed to finish one, but the sweetness made the thought of eating the second unbearable. The marshmallow filling (really whipped creme, I guess, but it was pretty similar to marshmallow), however, was quite nice and wasn’t grainy like that of the Valomilk. The texture was perfect – fluffy, foamy, and sticky. This meant it wasn’t as messily oozy as the Valomilk was, though the Mallo Cup did drop little grains of chocolate that got embedded in my jeans.

I wonder if anyone bothers to send the “Play Money” in anymore. I also wonder what’s included in the catalog, and I love how you have to send away for it because they don’t have a website.

I’d give these an OM. I may buy them once more, but I think that would be enough Mallo Cup to last me a good while. Guess I’ll never get that $1 rebate.

One thought on “Mallo Cup [Review]”