According to its entry on Hershey’s website, the Zagnut has been around for ~80 years now (I think Hershey’s needs to update their mathing). Wikipedia says that it used to be owned by the Clark Company, though how Hershey’s ended up with Zagnut and Necco ended up with the Clark Bar, I don’t know. Cybele didn’t know either.

I do know that I found it tasty, and like the Clark Bar, it made me wonder how I’d never had one before. Mine came in a gifted sample box from Munchies Sweets and Treats, but I do believe I’ve seem then in Wegmans, housed in the retro candy display.

The bar was described as “crunchy peanut butter – toasted coconut.” It had the flaky layered center of a Clark Bar, plus an outer layer of what looked like compressed nuts. 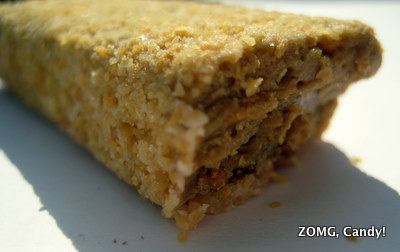 The golden bar was super crisp. As I bit into it, there was a lovely crunch, and flakes well, flaked off. I also noticed tiny bits of peanuts in the texture.

It tasted mostly of peanuts/peanut butter with a touch of coconut to the finish. Some of it got lodged in my molars a tad, like brittle, but it wasn’t nearly as bad a teeth situation as you get with Butterfingers.

I loved the texture, with its mix of flaky and crispy, and the nutty/coconutty flavors were nice as well. I’m definitely a newly converted Zagnut fan. An OM.