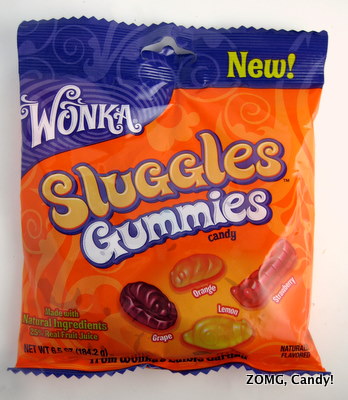 Tangent aside, these are a fairly new addition to the Nestle/Wonka line. I bought them at the same time as the Puckerooms, and both were released together as Wonka’s inaugural gummies.

Sluggles came in four flavors – orange, lemon, strawberry, and grape – and four shapes. I hereby dub them almost-snail, worm, stepped-on, and standard-slug. Like the Puckerooms, all the flavors came in all the shapes. 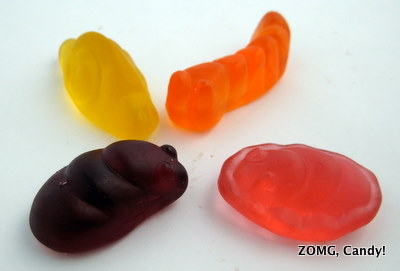 The gummies were soft and immensely sproingy, a textural combination that I find ideal for maximal chomping addictiveness.

Orange was blandly sweet with a zesty citrus aftertaste. Lemon managed a brightly zest lemon flavor but was more muted than I would’ve liked. 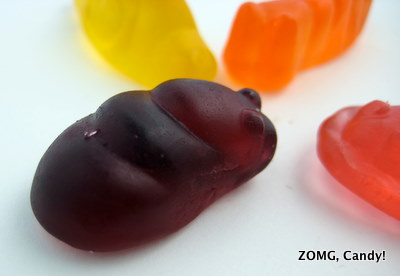 Strawberry and grape were both bland. The formal was floral and sweet, while the latter was mostly sweet with a grape-y finish.

Compared to the Puckerooms, these gummies were rather disappointingly mild. I loved the texture, but I wanted punchier flavors.

At least the shapes are fun, and sluggles is still fun to say. An O.

And finally, here are Cybele’s review and Sera’s take.