It’s here! It’s here! It’s finally here! After years (okay, really just months) of searching and asking every time I went into my local Trader Joe’s after I completely gave up on ever finding one because a Trader Joe’s cashier told me that they were no longer orderable, I GOT TO EAT A SPECULOOS CHOCOLATE BAR!

Got a little overexcited there… let’s backup. Trader Joe’s introduced their “Les Chocolates de Belgique” line of chocolate bars {filled with} things with three bars: a caramel one, a chocolate buttercream one, and a Speculoos cookie spread one. The first two were easily found, but the latter most interesting and delicious-sounding one was missing from my local Trader Joe’s. 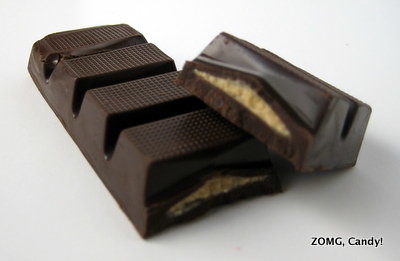 Until now! My friend Amanda found them on her latest Trader Joe’s run and was kind enough to remember that I had been lusting after them.

If you’ve never had a Speculoos cookie, you’re missing out. They’re light and crunchy cinnamon spice cookies from the Netherlands. Delta serves them on their flights as Biscoffs, and Trader Joe’s sells them as Bistro Biscuits. 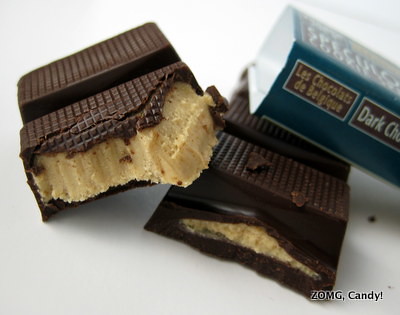 The chocolate bar had six segments full of Speculoos in cookie spread form, which was similar in texture to peanut butter. The cookie spread filling was creamy and thick but also pillowy soft.

The cookie bits added a slight grit and crispy crunch. It tasted of sweet cinnamon and dusky caramelized cookie. 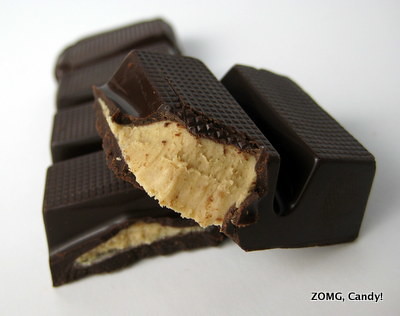 The dark chocolate shell was softened by the filling and lacked snap. The whole bar was on the soft side, hence the squished segment on the end of mine.

It tasted of deep cocoa with a woodsy finish and a minimal amount of sweetness – just enough to keep the bitter away. Paired with the cinnamon cookie, it was sweet and spicey and crispy and melty. So much delicious! 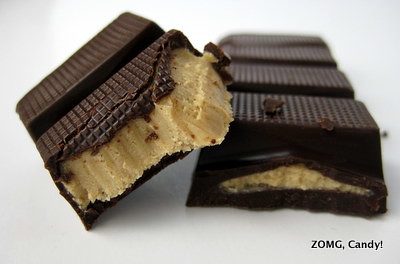 It was also so much fattening – 51% of your recommended daily dose of saturated fat in just one little 1.58 oz bar – probably because its center was basically cookies plus whipped oil. For that, I must take it down a notch, to an OMG. I want to hoard them, but I will try not to, for the sake of my arteries.