I believe I received this Torku Nugamel as a free sample from the NCA (my post-move pared down candy stash is still ridiculously large. I have not done my best in tracking its origins). I have a few other random Torku bars in my stash, one of which I’ve already reviewed.

It looked absolutely luscious on the wrapper, with its ooze of caramel seeping out. I don’t read Turkish, but I assume the wrapper promised chocolate, caramel, and nougat.

Alas, the caramel was too much like that of the wrapper – mine had completely seeped (or been squished) out in transit and somehow nearly disappeared from the actual candy bar, though some remained stuck to the wrapper. Perhaps the caramel had become absorbed by the nougat? 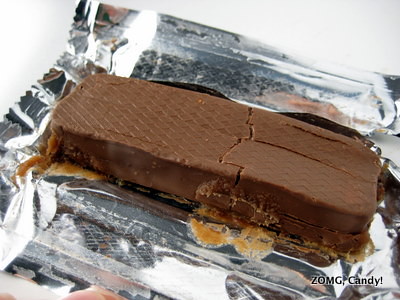 That nougat was dense, much more so than that of a 3 Musketeers or even a Milky Way. It was soft but had a large grain to it as it melted.

The nougat had a nice maltiness to it, but it was overwhelmingly sweet. I wonder if the disappearing caramel played a part in the sugar bomb-ness. 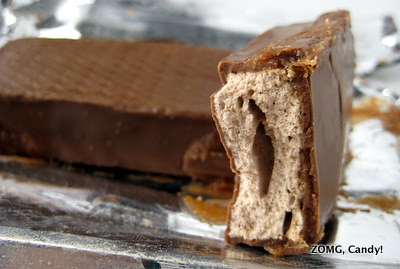 The chocolate coating was mild and added a slight chocolate finish. I could detect a hint of sweet caramel scorchiness, but it was overwhelmed by the overall sweetness of the bar. On its own (licked off the wrapper), the caramel had a nicely light burnt taste, though it was a little grainy.

While I enjoyed the malt flavor of the nougat and the edge on the caramel, it was just too sweet for me. An O.