I found this Angell Crisp bar in a food co-op in NYC. On Wednesday, I’ll review the Dark Angel version. The Angell Crisp wrapper promised, “milk chocolate; crispy creamy chocolate center”, all wrapped up in an organic and fair trade candy bar.

My first impression upon biting into this bar was, “Hmm… It tastes good for you.” It had this strange, almost vegetal edge to the flavor of the chocolate and a wholesome heaviness to the crisps. Neither was bad; just different.

It was impossible to tell where the chocolate shell ended and the creamy chocolate center began. The bar melted in my fingers, making for an annoying photo shoot.

The chocolate tasted almost throat-burningly sweet, despite its dark appearance. As I said before, it had a strange edge to it that reminded me of vegetables – beets maybe? – and a chocolate syrup finish.

The rice crisps had a stale mouthfeel and reminded me of puffed wheat cereal. They didn’t have a dry crisp that dissolved into airiness. Instead, they chewed up with a bit of texture to it, perhaps because they were made of brown rice. 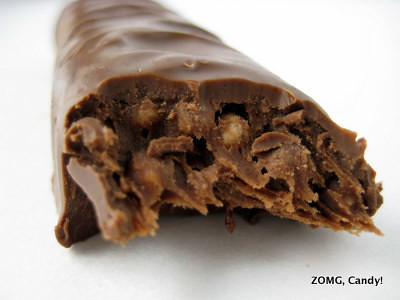 It was an okay, if rather wholesome feeling treat. I finished off the whole bar, but I don’t think I’d buy it again, especially since the bars were $2 each. An O.

I believe I received this Torku Nugamel as a free sample from the NCA (my post-move pared down candy stash...