Earlier this week, my friend Cassie took me to That Popcorn Place on the downtown Drag near UT. What a wonderful food find! They’ve got dozens and dozens of flavors of popcorn, from the savory (ranch, cajun, sour cream and onion, bacon and cheese) to the candied (caramel, vanilla, orange) to the decadent gourmet (s’mores, cookies and cream, dark chocolate), and oh man are they good! 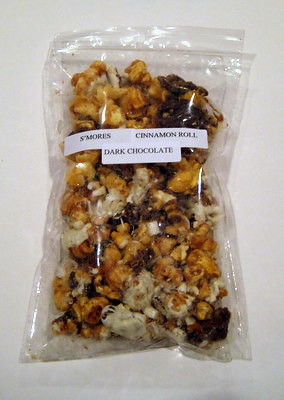 In accordance with Austin’s Keep Austin Weird philosophy, That Popcorn Place is a literal mom and pop operation. Mark, the “Pop” of the business, was in the shop when we stopped by, and he’s the most gregarious proprietor I’ve ever had the pleasure to come across. He gladly answered all of my questions about the shop and the popcorn and was incredibly generous with the free samples (the portions of which were also generous). In fact, I had to stop him from bringing out even more flavors for us to try because I couldn’t finish it all. I think if we had asked, he would have let me taste every one of his 50+ flavors. Believe me, I felt bad about turning down free samples and leaving popcorn behind on the counter.

I walked out with a small sized (about 9 cups) mix of some of their savory flavors (ranch, loaded potato, and cajun) and a snack sized (about 3 cups) bag of three of their decadent gourmet flavors: s’mores, dark chocolate, and cinnamon roll. Each bag was only $4.50 (the decadent gourmet is more expensive because it’s loaded with chocolate), a popcorn steal. For the record, the snack sized bag was packed full to the brim when I bought it; I ate a bunch on the way home because I just couldn’t resist.

As you can probably guess, I absolutely loved the decadent gourmet popcorn. I tried the cookies and cream (vanilla popcorn tumbled with oreo pieces) in the store and didn’t like it enough to buy it, but even that was good enough for me to polish off my handful of free sample. I ended up choosing cinnamon roll because Mark said that was his favorite and the one he was most proud of, s’mores because the three other customers in the store at the time ordered it, so we figured it had to be good, and dark because Cassie wanted to try it. Mark was wonderful about letting us mix flavors in the bag, so don’t be afraid to ask for that if you’re able to visit them in person. And if you order online, it couldn’t hurt to try and ask for that same accommodation. Or you could just buy a bag of each flavor – it’s worth it! 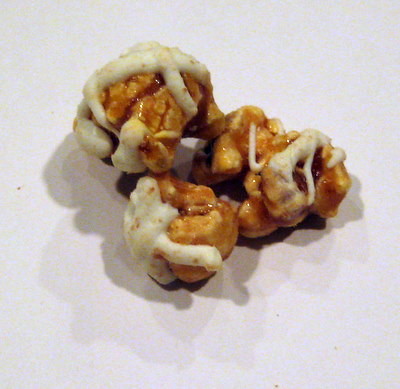 The cinnamon roll is their caramel bliss popcorn with a hint of cinnamon and drizzled in white chocolate. It has just the right touch of cinnamon – strong enough to make its presence known but not so strong that it overpowers the caramel. The white chocolate is a great evocation of cinnamon roll icing, and it’s good quality chocolate too. The caramel layer is perfect – thick enough to get stuck in your teeth a little, but no so thick that it stays stuck there. The thinness of the caramel layer also gives the popcorn a little bit of a chew and a crunch without making it difficult to bite down, like some other caramel popcorn gets. 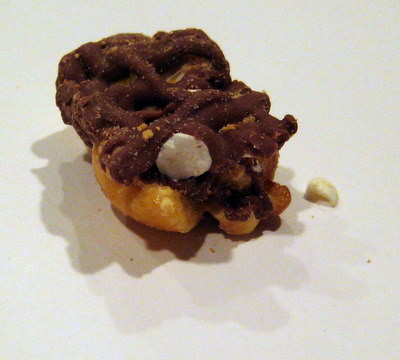 The s’mores was their caramel popcorn plus mini marshmallows, graham cracker crumbs, and a heavy drizzle of milk chocolate. At first I thought the mini marshmallows were just bits of white chocolate, but nope, actual marshmallow bits. The texture was dry and almost styrofoamy, but the pieces were too tiny for the texture to be noticeable unless you very carefully nibbled apart a marshmallow bit on its own, and the marshmallow taste was spot on. I couldn’t really taste the graham cracker crumbs through the heavy chocolate coating, but every once in a while I’d get a large piece of cracker, and then I could taste it. It couldn’t hurt for them to use larger bits of graham cracker. Finally, the milk chocolate was really good – sweet, smooth, and creamy. I wish I’d thought to ask Mark what brand of chocolate they used.

We asked Mark to throw in just a few pieces of dark, and I didn’t really notice any in our bag. I think that’s because the milk chocolate of the s’mores was so nice that it approaches what some companies try to pass off as dark, because the sweetness of the caramel probably undid the lower sugar content of dark chocolate’s flavor, and because I tore through my bag of popcorn pretty quickly. An enthusiastic ZOMG!!! for the lot. Extra exclamation points for top notch customer service.

I hope That Popcorn Place will be open on Saturday so I can buy more to bring back to New Haven with me. If not, they’ll be one of the first places I visit when I’m home for winter break. They also offer online ordering, though it means missing out on the in store experience! I may resort to that if I need a popcorn fix in the spring semester. The shipping and handling gets a little pricey, but the popcorn is so well-priced that I think I could afford the splurge. They also have cute gift tin options, and I personally would be delighted to receive this popcorn as a gift.

In case you’re wondering, the savory flavors were incredibly, ZOMG!-worthily delicious too. I won’t write about them here because they’re not candy-related, but they’re gooooood, and you should buy some. I especially like the cajun, and the dill pickle is weirdly intriguing.