TCHO chocolates have long been on my radar. I finally got to try them when my roommates were kind enough to bring me a variety pack from California. The variety pack contained 2 each of their fruity, chocolatey, nutty, and citrus flavors. 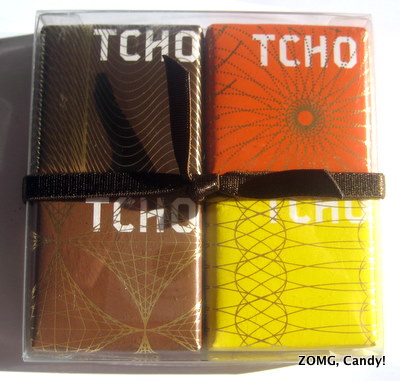 All of the squares were about 5 centimeters across the diagonal and quite thin, just half a centimeter. All were comprised of 70% cacao.

“Fruity” was made with organic and fair trade beans from Peru. It had a sharp snap with a very dry mouthfeel. There was a definite red fruit fruitiness to it, but the overall flavor was dominated by the stale taste of paper/cardboard. 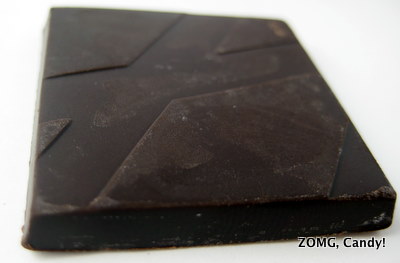 At first I thought I just had an off square – I had unwrapped it to take photos and then rewrapped it for later – but that cardboard taste pervaded the other, not-unwrapped-until-tasting-time squares.

“Chocolatey” (beans from Ghana) smelled duskier and featured strong cocoa notes and an almost savory tinge. Its mouthfeel is also dry, but it’s a bit smoother/creamier once it starts melting. The paper/cardboard taste is present in the finish. 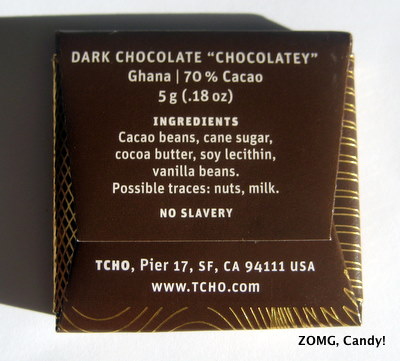 “Nutty”, made from organic and fair trade beans from Peru, was the softest and creamiest of the bunch, and it did carry a distinctly nutty favor. But that paper tinge is still there.

Finally, “Citrus” (organic beans from Madagascar) smells sweet and has a very dry and crumbly melt. It tastes a bit chalky with a sweet bright finish, and again that infuriating, ruinous tinge of paper/cardboard taste. 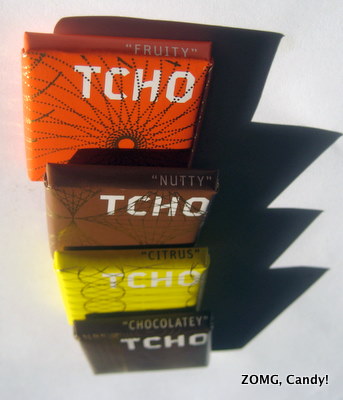 I think TCHO needs to rethink their packaging on these bars, as they all took on an unpleasant, papery overtone that ruined the taste experience. I’ve had them sitting around for a few months, but bars should keep for at least that long, especially when you’re selling them in 90-day supplies.

I’m torn on how to rate these. The paper taste warrants a —, but that doesn’t seem quite fair, as TCHO didn’t mean for them to taste of paper. Then again, they did choose the packaging and neglected to put a “best by” date on the package or any storage guidelines (that I could find) on their website. So the — stands, with the caveat that my supply was off.