I personally rather like the ad campaign that Stride (BUY!) has been running. The commercials I’ve seen revolve around the company and those that sell it going out of business because the flavor lasts so long that people don’t need to buy new packs. 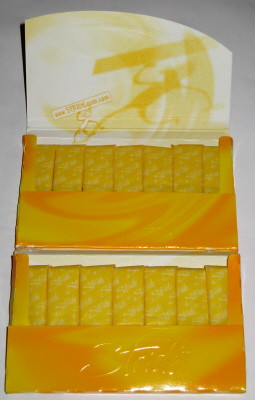 The packaging is like that of Dentyne’s soft gum, which makes sense because they’re made by the same company. It’s clever. You can finish the bottom flap’s worth of gum, tear it off, and still reseal the rest of your pack in the top half’s notch.

The Forever Fruit flavor smells delicious – sweet and citrus-y and quite appetizing. If only it tasted as good as it smells! It’s rather generically fruity, and that generic flavor isn’t bad; it’s just nothing to crow about. After a bit, the fruity flavor degrades into a faint artificial sweetness that lasts for a long time. I chewed my way through the movie Superbad, and the flavor made it pretty much the whole way through the movie. That long-lasting flavor, however, isn’t exactly one that’s enjoyable for an extended period of time.

I’d like to try the other flavors of Stride that maybe won’t taste so much of aspartame. It also comes in sweet peppermint, winterblue (which I assume is wintergreen), and spearmint, but alas, no cinnamon yet. For my fruit flavored soft gum needs, I’ll stick to Orbit (I particularly like their raspberry mint).