The Violet Crumble is a chocolate bar from Australia. This was in the bunch of candy that Cassie gave me, and I finished it pretty quickly. I also saw it on sale at Economy Candy, where a woman had about a dozen in her basket. I commented on how tasty it was, and she and her male companion both enthusiastically agreed with me.

The Violet Crumble bills itself as crisp golden honeycomb covered in milk chocolate. “It’s the way it shatters that matters,” says the wrapper. These are apparently very popular in Australia, which is probably why it’s possible to find them in the U.S. 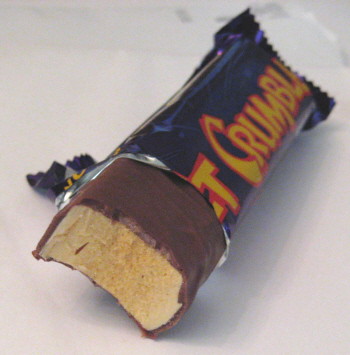 The milk chocolate that covers the Violet Crumble is sweet without inducing a gag reflex. The inside is a dense looking crisp that’s actually light and airy, which, true to saying, shatters (cleaves) in a way that’s pretty neat. The texture reminded me of the inside of a malted milk ball, but it dissolves much slower than malt, and when you chew it, it doesn’t completely shatter and disintegrate. Instead, it almost feels like a little will get stuck in your molars. In fact, I learned if you chew a big enough chunk, a little bit of actually does, though it melts away quickly.

The flavor of the “honeycomb” is super super sweet, with a tinge of burnt sugar taste. I usually dislike candy bars that are as sweet as the Violet Crumble, but I found that I could enjoy it a few bites at a time. It’s so unique that it’s worth a try.

If you do choose to save some of your opened Violet Crumble for later, I recommend sticking it in an airtight container or something. My piece picked up a little moisture, which altered the perfect crisp dryness of the crumble, though it was still tasty. The Wikipedia article on the Violet Crumble goes into great detail about how the packaging keeps the bars dry.

I found a similar candy called the Dark Sponge at Economy Candy that’s much, much better than the Violet Crumble. You shall see why in tomorrow’s post.