I have no idea how long Starburst GummiBursts have been on the market. The bag says New!, but I bought it at a Big Lots. If you don’t know, Big Lots sells closeout goods of all kinds, including candy, making it a great place to go for random candy finds. For example, my neighborhood Big Lots still has giant bags of Limited Edition Indiana Jones Mint Crisp M&Ms available. I almost bought one (they’re pretty good), but this was at home, and the bag was too big and heavy to fly back to school. Anywho, on to the Starbursts. 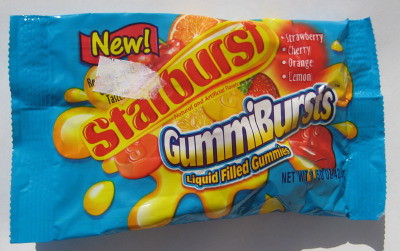 They have the texture of a soft gummi (though not as soft as fruit gems) with just the right amount of springiness. The liquid inside is clear and oozy and gooey, similar to the goo inside Gushers, but less sticky. GummiBursts are much easier to eat than Gushers, as they don’t get stuck in your teeth, and the textural combination of the gummi and the goo makes them quite palatable. 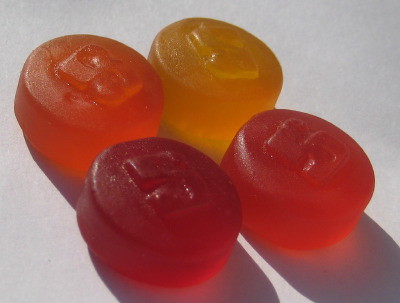 The orange gummi had a muted citrus flavor, while the liquid inside was slightly more sour. Overall, it was pretty meh and not nearly as bright as orange Starburst chews. The lemon gummi was initially sweet. After a second or two, a nice lemon zestiness kicks in, and the whole thing has a good lemon-y finish. Here the goo doesn’t add much.

Strawberry was the pink/less red one (bottom right). It had a rotund berry flavor. Cherry, the darkest red, doesn’t taste like anything for a second or two. Then the cherriness comes in, and it has a nice fruity finish.

As best as I could tell, the liquid part doesn’t add much in terms of specific flavor, and I wouldn’t be surprised if the same liquid filling was of the different flavors of gummi. Still, it was an important textural component, as it made eating the GummiBursts fun and addictive, making them OM-worthy.

See what you think: