Poppets are a UK treats that I came across while I was in Cambridge. I’ve seen them in Mint, Toffee and Raisin but didn’t buy the latter as I don’t really like chocolate covered raisins. The Poppets boxes have strangely eye-catching packaging with random remarks on the back. For example, here’s the front of their Mint box: 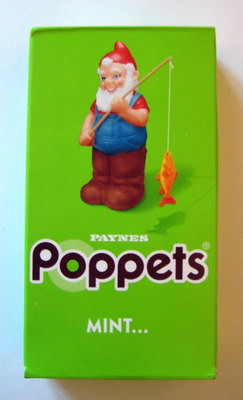 Okay, gnome, with a fishing pole. Kinda weird. Gets weirder on the back: “Dad always wondered where the fish had disappeared to… Aaahh bless, it must be his age!” The Toffee box has a pail full of sand and with a shovel inside, and the back says, “He still finds sand in his ears… Amazing as it was 3 years ago that we buried him on the beach!” Both boxes end with the tagline, “Remember when?”

Enough about the packaging; how do they taste? 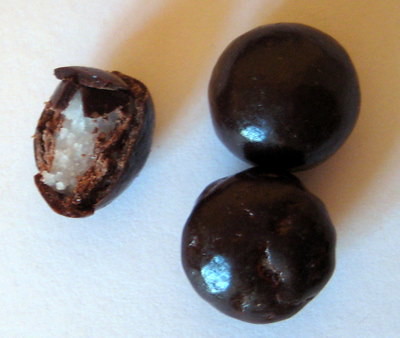 The mint Poppets are a so-so dark chocolate coating around a mildy minty fondant center. The pieces were pseudo-spherical, in that they were round but irregularly shaped. They were slightly refreshing, and that combined with their poppability earns them an OM.

Toffee Poppets are similarly sized and shaped. Unlike the mint Poppets, the toffee ones have a mild milk chocolate coating. The caramel inside is hard and sticky and is pretty good at working its way into your teeth. It starts off super firm, then warms and softens. I liked them. They were like sophisticated Milk Duds, as the caramel had nice dark tones to it. Another OM. 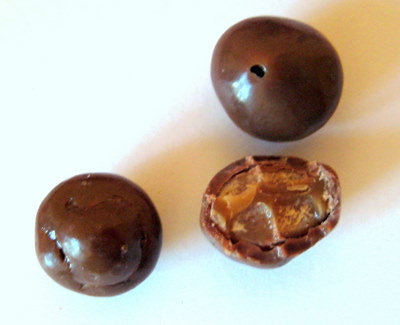 So overall, the Poppets fared decently well. They’re worth an impulse buy at the counter, if you happen to be in the country where they’re sold.