Ever since someone brought my family a can of See’s Almond Royal as a hostess gift, See’s Candies has been a Li family favorite. When we were on the West Coast last winter, we made sure to visit at least one See’s store to load up. I’ve also previously reviewed one of their chocolate fundraiser bars when one of the boys next door had a whole case. 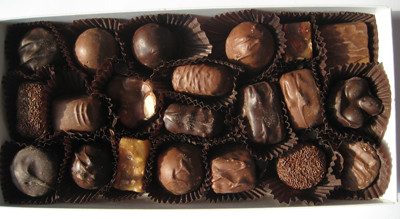 When See’s emailed asking if I wanted a free box of their chocolates to review, I, of course, said yes. A couple of days later, I received an entire pound of their assorted chocolates. Because you can create your own custom mix, either online or in the See’s store, I shall review them piece by piece over the course of this week. 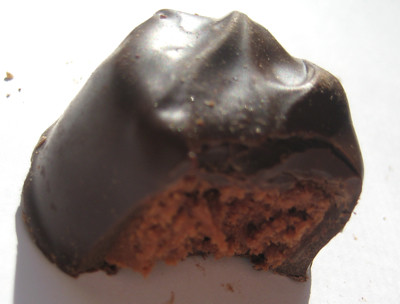 The Dark Chocolate Butter is a chocolate buttercream enrobed in See’s dark chocolate couverture. The buttercream inside is fluffy, sweet, and pretty cocoa-y. Along with the dark chocolate coating, this was overly sweet for my taste, but it was good. An O from me, but most people have a higher tolerance for sweetness than I do, and I can see others enjoying it. 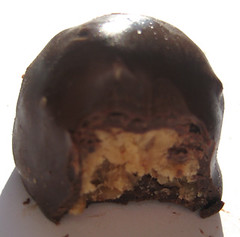 Maple Walnut is a maple buttercream with English walnuts. It reminded me of the chocolate covered maple sugar candy from The Big E that I reviewed a while back, but better, as it was less cloying, and you could still taste the chocolate. The buttercream had a strong maple sugar flavor, and it was on the crumbly side for a buttercream. The crunchy walnuts tempered the sweetness a bit. Another O from me. 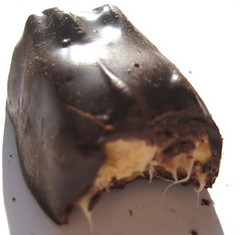 The Dark Nougat contains honey nougat, coconut, vanilla, and almonds. The honey nougat was more like a chewy caramel, and I liked the almond crunch. It was like a Snicker’s bar, just with dark chocolate and almonds. I enjoyed the balance of nutty and salty and crunchy and chewy, earning this an OM. 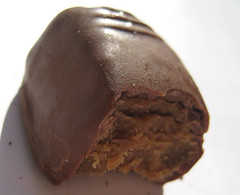 I’m pretty sure the above is a Butterscotch Square, which See’s describes as a “firm brown sugar, vanilla buttercream.” I’m assuming that means a brown sugar and vanilla buttercream? This was a sweet milk chocolate over a brown sugar center. It was throat-burningly sweet, but I actually liked it, for the same reasons that I’ll sneak a few grains of brown sugar by itself while making my morning oatmeal. And I enjoy See’s milk chocolate couverture, which is creamy without being too sweet. An OM for this guy, even though I couldn’t eat more than a bit at a time.