Today we have the next batch of chocolates out of the free sample box of See’s Assorted Chocolates that I started reviewing on Monday. 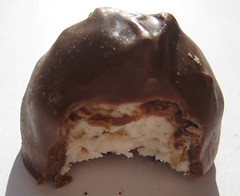 First up, their vanilla nut cream, a vanilla buttercream with English walnuts. What makes English walnuts better than walnuts unaffiliated with a specific nation? I suppose that’s a moot point. Anyway, this is a nicely creamy buttercream with tiny bits of walnut sprinkled throughout. The milk chocolate coating is nice, but the filling is just too much sugary overload for me. An O. 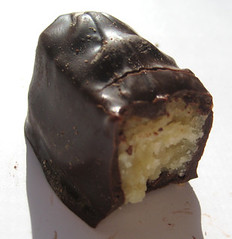 See’s marzipan fared much better. I really enjoyed this one. Their guide just describes it as “honey almond paste,” which I suppose just makes it regular marzipan with a touch of honey. It’s enrobed in their bittersweet dark chocolate, which balances nicely with the nutty almond filling, and the whole thing has just a touch of fruity sweetness to the finish. I found it especially refreshing because it was barely sweet, in contrast to the rest of See’s filled chocolates. An OMG, and quite a coup from See’s, as it was far more enjoyable than Charles Chocolate’s much more expensive version, if not as pretty to look at. 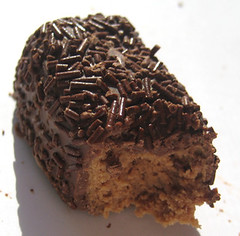 The mocha was easily identifiable, as it was covered in chocolate sprinkles, or jimmies, as some like to call them. This is a coffee milk chocolate buttercream, and it definitely packs a punch of coffee flavor. It also packs a punch of sugar sweetness, which was too much for me. I did enjoy the textural contrast provided by the jimmies, at least. An O. 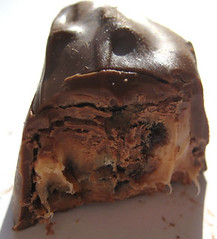 The rum nougat is one of See’s stranger concoctions: English walnuts, rum, cherries, and raisins in nougat. That’s an awful lot to be going on in one piece of candy. The cherries and raisins aren’t really distinguishable in the mix, though they do give the whole thing a noticeable fruitiness. I can definitely taste the rum as an overarching hint of liquor. Between the chewy nougat, the gummy dried fruits, and the softly toothy walnuts, this chocolate was texturally… interesting. Another O. 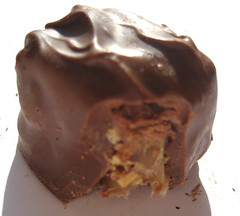 I adored the caramel with almonds. This chocolate featured whole or sizeable chunks of almonds embedded in caramel, all covered in milk chocolate. The almonds had lovely roasted notes that nicely mitigated the sweetness of the creamy milk chocolate and the buttery caramel. The caramel with almonds had just the right amount of chew to get your jaw going without taking out fillings. An OMG. 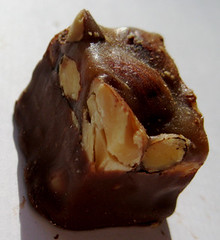 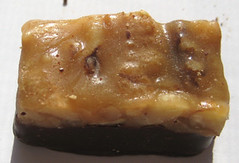 Last for today, the walnut square. It was like the almond square, only with English walnuts instead of roasted almonds. Walnuts rank pretty low in my hierarchy of nuts, definitely below almonds, so you can guess what I thought of this – similar to the almond square, but not as good. An O.

Phew. That’s a lot of chocolates for one day. Onward to Friday, where Rosa finishes the box, pretty much.