Here’s another weird candy-related science from Discover Magazine’s Discoblog: “Use of a clay modeling task to reduce chocolate craving.” This one’s a little closer to my field of expertise than the last one, so I feel more qualified to break it down a bit more. 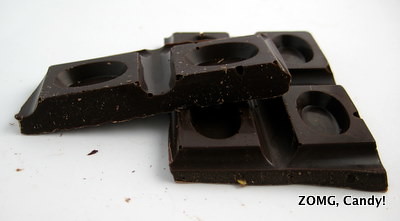 Next, participants did one of three tasks while the forbidden chocolates sat on the table in front of them. Contrary to what the Discoblog’s chosen image may have you believe, some people were asked to make generic shapes (not mini chocolate treats) with modeling clay while they could see neither their hands nor the clay. This was thought to serve as a distraction to the visuospatial system.

The other two sets of participants did either a counting backwards by 3’s task to stress the verbal working memory system, or a “sit still and allow your mind to wander” task to control for the passage of time. All participants did their assigned tasks for 10 minutes and then reported their chocolate craving levels again.

Their error bars are really giant – error bars are those vertical lines on top of the bars; the ones in the figure above represent the variability in the data. In simplified terms, error bars can represent the portion of the graph in which you believe the true value of what you’re trying to measure lies.

So takeaway lesson: don’t invest in a bunch of Play-Doh to cure your chocolate cravings just yet – though I bet if someone wanted to market a crazy new Play-Doh based weightloss technique and cited this study, they could still make a boatload of money.

Nutffles was a company that was new to me until I visited their booth at Sweets and Snacks. Nutffles is...