Not Just Cereal is “the first chocolate-coated cereal snack…that combines the flavor and crunch of your favorite cereal covered with a smooth, milk chocolate layer.” They’re currently available at Walmart; I got mine as free samples from their PR people. 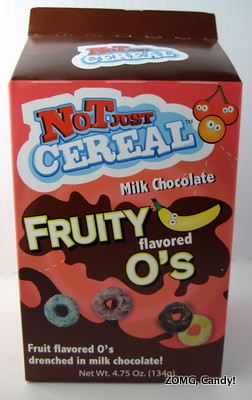 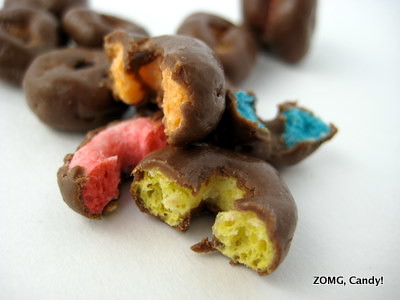 The coating was shiny and soft and tasted like a mix of cocoa and artificial sweetness. Surprisingly enough, the fake Froot Loops worked well with the chocolate/mockolate combination.

The cereal brought a nice crunch and an artificial fruitiness that conveniently masked the slightly not-quite-right-ness of the chocolate coating. 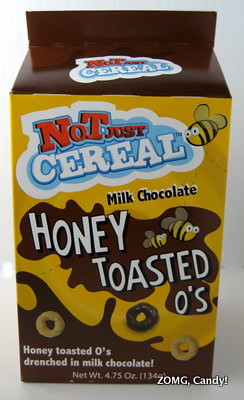 Since the Fruity O’s were good, I figured the Honey Toasted O’s would be even better. These are off brand Honey Nut Cheerios coated in the same chocolate-ish coating. 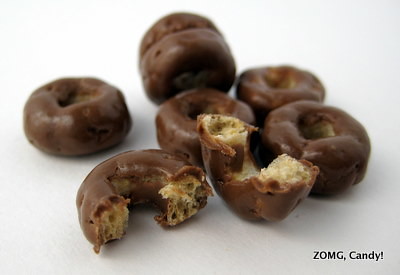 I don’t know if I got an off box or what, but mine tasted slightly stale. I didn’t particularly care for the vague corniness of the cereal, or its fake honey tinge. 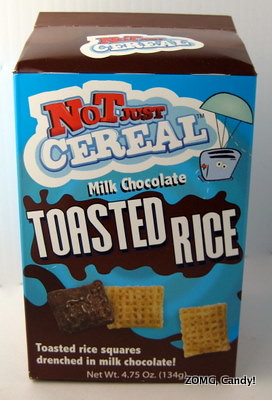 The Toasted Rice was off brand Rice Chex. The blandly crispy rice worked well with the chocolate/mockolate coating by tempering the chocolate’s over-sweetness. 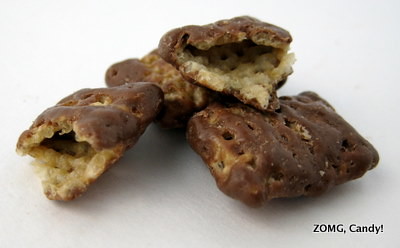 I really enjoyed flattening the little cereal pillows against the roof of my mouth with my tongue. After a few too many, however, the chocolate got cloying.

I should point out, though, that this is the first of the Not Just Cereals that I enjoyed enough to eat so much that I got that cloying feeling. 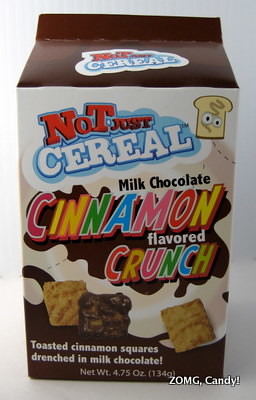 Cinnamon Toast Crunch is one of my favorite snacking cereals, so I was excited about the milk chocolate flavored Cinnamon Crunch. It wasn’t as airy as the Toasted Rice, but it still brought a nice crunch. 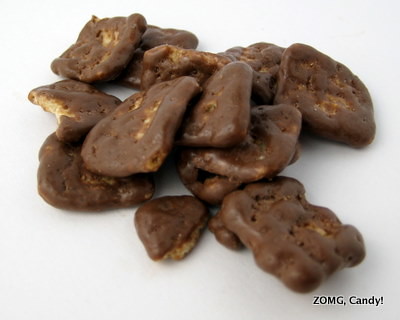 I loved the combination of the crunchy, chocolatey, cinnamony cereal (how’s that for alliteration?). But for some reason, there was an odd, faint mintiness to the finish. It wasn’t off-putting, exactly, but I could’ve done without it.

Still, the Cinnamon Crunch were my favorite of the bunch, and I managed to eventually eat the whole box, so they get an OM. They’re followed by the Toasted Rice and the Fruity O’s (Os), and finally the Honey Toasted O’s (—).

I might buy the Cinnamon Crunch again (hence the OM), but I think I’d prefer to make my own, where I could control the quality of the chocolate. Realistically, though I may just stick with making puppy chow.

One thought on “Not Just Cereal”